Child or Weapon? The Psychological Dynamics of Parental Alienation 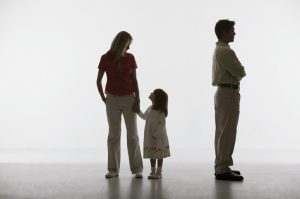 Parental alienation syndrome (PAS), a term coined by Richard A. Gardner in the 1980s, describes a condition—usually generated in the context of divorce or child custody disputes—in which a parent creates an alliance with their child against the other (non-abusive, nurturing, protective) parent. The child, influenced in part by the alienating parent, contributes to the dynamic by denigrating the targeted parent.

According to Dr. C.A. Childress, attachment-based parental alienation is created when a person with narcissistic tendencies gets their child to reject the other parent as a way to modulate the narcissistic parent’s anxiety. According to Childress, this anxiety is threefold:

The other parent is pitted against their child in order to regulate the anxieties of the alienating parent. The parent with narcissism essentially uses the child as a regulatory object to assuage deep anxieties via this created drama, wherein the narcissistic parent gets to be perceived as the “normal” or “good” parent while “rescuing” the child from the other, “crazy,” alienated parent.

The created drama “resolves” the alienating parent’s childhood unconscious narrative of abuse whereby the person, as a child, had to split off their perception of the abusiveness of their own parent(s) from cognitive recollection—thereby divorcing themselves from having to feel the rejection of their own misattuned parent(s).

When a child’s family experiences divorce or separation, the child typically experiences feelings associated with grief. The parent with narcissistic tendencies is able to capitalize on these negative feelings by attributing them to the so-called abuse of the other (non-narcissistic) parent. The alienating parent will wage war against their ex in order to temper feelings of rejection and inadequacy, using the child as a pawn.

Parental alienation syndrome is not recognized as a disorder within mental health or legal circles, and not everyone agrees it is a “thing.” Tina Swithin of One Mom’s Battle describes what occurs as domestic violence by proxy. In other words, the alienating parent is really just trying to abuse their ex by using children as weapons.

While the parent with narcissism, prior to divorce, could not have cared less about the children’s school events, etc., post-separation they act like “super parent,” showing great attention to activities previously ignored. This is impression management.

Domestic violence by proxy is a pattern of behavior rather than a set of specific actions. The underlying motives for abusers are power and control. While in the relationship, the abusive person can abuse in more ways than one, usually directly. Once separation occurs, the children become the most effective means of abuse.

According to this theory, the abuser knows they are abusing and the actions are specific and intentional. Other people, such as therapists, attorneys, or child protection agents, are often duped by the narcissistic person’s behaviors and may come out against the non-abusive parent. An abusive parent may even end up with primary custody of children as a result.

What an Alienated Parent Can Do

If you are the target of parental alienation, what can you do to protect yourself and salvage your relationship with your children?

Realize you must keep yourself strong and hopeful and do not become defeated. Be creative in your strategies, keep your energy strong, and never let your ex or your children know how victimized you feel. Many people with narcissism are to weakness as sharks are to blood. You may get eaten alive if you let your children or your ex know how defeated you feel.

Don’t let your fears keep you from action. Don’t catastrophize. Stay in the present and try the strategies below: