Are You and Your Spouse Like Ships Passing in the Night? 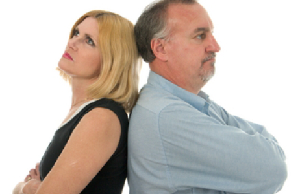 “I’ve made up my mind,” Dana sighed deeply. “I’m going to stick it out–for the kids. I won’t cheat. I have no intention of that and I don’t believe he would either. We are two straight-arrow people. But there’s nothing there. We have nothing, absolutely nothing to say to each other. The marriage is basically dead; we just didn’t plan the funeral.”

“That is tragic. Marriage is supposed to be a friendship, not a zero,” I said. “How did this happen?”

Dana didn’t know. At first, she couldn’t put her finger on it; then she hesitantly said, “Maybe I withdraw when I get hopeless. Maybe that’s it.”

She explained how, in the early years, she would tell her husband many times what she wanted, needed, thought, or felt. And when nothing changed, she eventually gave up. “It just dried up like an autumn leaf,” she sighed again.

Dana’s situation is typical of many couples—and it needn’t be.

Here are six questions for Dana to consider:

1. Was there a time when she and her husband were able to talk?

Looking back at the early days, most people can remember that talking to one another was not a problem, that there were always things to say and lots to hear. If listening was once fun and talking felt like there was a real audience, then there is hope. If you once had a connection but lost it, then that connection can be found again. Instead of thinking about not getting her own needs met, perhaps Dana can start listening to what her husband is saying. If she can understand what he wants, then perhaps that can be a starting point for later requesting he listen to what she wants.

2. If there was a time when Dana and her husband could talk, then is there something she may have done to contribute to the current problem?

If indeed Dana and her husband enjoyed talking to each other, then honesty requires some soul searching. Perhaps if Dana looks inside, she will notice that things shut down when she started to ask for what she wanted but her husband was unable to do the same thing. Or maybe they both asked for what they wanted but each person was thinking more about their own unmet needs than fulfilling those of their partner. Alternatively, maybe each would have liked to fulfill the partner’s needs but lacked the tools to know how, or even to understand what the partner wanted. Bridge the gap with some good, strong questions. For example, ask your partner: “Do you know what I want in this marriage?” Or, better yet, ask: “Is there something I could do differently to improve things?”

3. If Dana and her husband could not talk, did they feel close anyway?

There are people who were never good talkers, but they had great sex or lots of affection and that made them feel close. Just having shared life experiences can bring people close. And if that is the case, then maybe expecting to talk later on is not quite fair. If Dana knew that her partner was not a big talker going into the relationship, then now isn’t the time to say, “Oops, I made a mistake.” Perhaps Dana can consider how to re-capture the original affection. How about taking time to date? Dates that don’t call for talking but do call for interacting such as bowling, miniature golf, rowing, and rollerblading come to mind.

4. What do Dana and her husband both care about? Do they have values, passions in common?

Even if the relationship was never close, can this couple start from the ground up and build on commonalities? Dana mentions that neither one of them will cheat because they are both “straight arrows.” That’s a pretty important value in common. What goes along with that? How could they make that the basis for creating something good out of things that they never considered before?

5. Is there one quality in Dana’s husband that she admires or respects?

Good marriages are built on respect. So, even though Dana and her husband could not talk, it could be that there is something respect-worthy in Dana’s spouse, but she was so focused on not getting her needs met that she lost sight of that. Perhaps Dana could give some thought to what other people like in her husband so as to be able to view him with fresh eyes. How do the children view their dad? How about lifelong friends? Co-workers? Extended family? Neighbors?

6. Has Dana’s husband introduced her to something positive that she can appreciate?

Dana might ask herself if her husband gave her some “gift,” an interpersonal gift, not a tangible thing, that was special. For some people, it could be a sense of humor; for others, it could be the ability to stand up for oneself; for still others, it could be the ability to organize. It could be a silly thing or a heavy thing. Regardless, I’ve noticed that nearly everyone, no matter how annoying, distant, even mean, that they can be, has a gift to offer. It’s not something they even intend to give, but just by being whom they are, they demonstrate a good trait, a trait that their partners would love to have. So can Dana fish out from within her what it was that she “got” from her partner that she never had before?

In this list, you may be surprised that one question I did not ask was, “Do you love him?” That is because feelings change instantaneously. I was at a workshop recently where therapists were learning a new technique. They had to pretend to be one of their clients and express their clients’ feelings about some problem. It was fascinating how negative all the attendees in the room felt after that! And everyone was a therapist! When you get into a negative mood–even when you’re pretending—something bad sticks. Moods fluctuate depending on how the relationship is going at that time.

Love – or the absence of it — is the same way. We can think it’s gone, but that may only be a function of this disconnect you’re experiencing right now. Dana and her husband can work on the suggestions here; watch to see what improves, and then see if their attitudes don’t change, too. Maybe then the ships would consider dropping anchor, sending up flares, and finding out what’s going on.