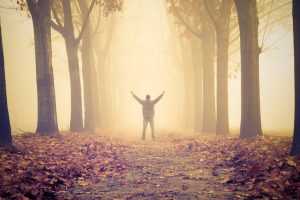 Imagine being able to make significant progress in healing from posttraumatic stress in one therapy session. Several mental health practitioners using accelerated resolution therapy (ART) have told me of such stories.

ART is a relatively new brief therapy for treating a variety of behavioral health issues. Effective relief has been shown to be achieved even for combat veterans in only three to five sessions (Kip et al., 2013). It is now being used in a number of U.S. Army hospitals, such as Walter Reed and Fort Belvoir, and is expected to expand through the armed services rapidly. The Federal Substance Abuse and Mental Health Services Administration (SAMHSA) has recognized ART as an evidence-based treatment for depression and depressive symptoms, personal resilience and self-concept, and trauma and stressor-related conditions (PTSD) (Accelerated Resolution Therapy, 2015).

ART is an eye-movement therapy. The person in therapy moves their eyes back and forth following the therapist’s hand, and the therapist gives specific directions before each set of eye movements. ART draws on a number of other established and evidence-based therapies, such as cognitive behavioral theory, gestalt, and eye movement desensitization and reprocessing (EMDR). However, it is unique in being a procedurally oriented therapy. Other therapies typically focus on the content of the person’s thoughts and emotions.

Since ART is procedurally oriented, the person in therapy doesn’t have to talk about what happened. This makes the approach great when working with people who may have trouble talking about their emotions, as might some individuals in the military. It also may be easier on the therapist, who doesn’t have to experience secondary (vicarious) trauma as a result of hearing about terrible things.

ART Is Said to Work Quickly

Very rapid healing is a hallmark of accelerated resolution therapy. Many therapists trained in ART report people can heal from a single traumatic event—such as an auto accident, assault, or witnessing an atrocity—in as little as one session. Some therapists report healing phobias in one session as well.

One consideration when choosing a therapy is how likely the person is to complete the full course of treatment. The longer a therapy takes to complete, the less likely it is the person will complete it. Because it is such a brief treatment, more people may be likely to complete a course using ART.

I recently watched the developer of ART, Laney Rosenzweig, heal a woman from two phobias in less than an hour. These very rapid results may seem unbelievable to someone familiar only with other therapies. Most of the evidence-based therapies for treating posttraumatic stress expect to take between 12 and 20 sessions to be effective. ART, meanwhile, has been shown to be effective in only three to five sessions in scientific studies of both military and civilian populations (Kip et al., 2012; Kip et al., 2013; Kip et al., 2014).  It was even shown to be effective working with a population of homeless veterans (Kip et al., 2016). Some of them didn’t complete treatment because they found jobs or housing, but despite this, a study found a success rate of over 50%.

One consideration when choosing a therapy is how likely the person is to complete the full course of treatment. The longer a therapy takes to complete, the less likely it is the person will complete it. Because ART is such a brief treatment, more people may be likely to complete a course using this approach to healing.

How Does ART Work?

Research is still pending, but eye movements used in ART are believed to have some link to the sort of eye movement seen in REM sleep, when the brain is believed to be processing the day’s events. We used to believe memories were fixed and that accessing one was like taking a book from a library, looking at it, and then putting it back. In fact, we have found accessing a memory makes it plastic; it can then be altered by the sort of techniques employed by ART. After four to six hours, the memory reconsolidates and the altered (new) memory is stored.

Who Can Benefit from ART?

ART has been used with a wide variety of people. Children as young as 4 have been treated with ART, and I recently utilized the approach to help a 16-year-old male with an IQ of 66. This method has been researched in both military and civilian populations, and similar effectiveness results have been obtained within both populations. (Kip et al., 2015).

Basically, three things are necessary for ART to be successful. The person receiving the treatment must be motivated to heal, capable of tracking the therapist’s hand with their eyes, and able to hold on to a thought.

How ART Differs from EMDR

Col. Charles Hoge, an Army psychiatrist who trained in both EMDR and ART, compared the two and noted 10 points of difference (Hoge, 2015). Some of the major ones are:

Why You May Not Have Heard of ART

If ART is so good, why haven’t you heard of it? There are two good reasons.

First, it’s new, having been introduced only in 2008 by its developer, Rosenzweig. Most other evidence-based treatments for posttraumatic stress have been around for over 25 years. Awareness is mostly spread by word of mouth, from one therapist to another, from one person in therapy to another. So far, fewer than 1,000 therapists have been trained in ART, and the vast majority of these therapists are located on the east coast of the U.S.

The second reason is sheer disbelief—based on the length of time it takes for other therapies to work, the ability to heal a person from one traumatic event in only a few sessions (or perhaps just one) simply seems unbelievable to many people, including therapists.

What’s Next for ART?

SAMHSA has identified ART as a “promising” therapy for disruptive behavior issues and antisocial behaviors; phobias, panic, and generalized anxiety; and sleep and wake conditions. These areas all need to be investigated via further research.

In addition, many therapists are reporting success in treating substance abuse and obsessive-compulsive issues with ART, but this type of treatment requires two sessions a week in the early stages.