The Yoga Prison Project: Lessons on Both Sides of the Bars 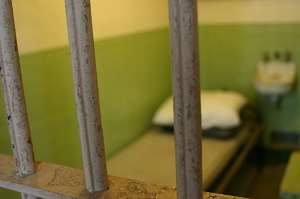 I like to volunteer—it’s a way to give back, and frankly, I think I get more than I give. I’ve done many different kinds of things: baked brownies for the homeless, taught chair yoga to senior citizens, supervised psychoanalysts in training—in China—by Skype. This summer I joined a gardening group to help beautify my community. Gardening was hands down the most fun, but whatever you do, remember that if you take care of somebody else, you’ll take care of yourself, too.

Right now I’m part of the Integral Yoga Prison Project, where we teach Patanjali’s Yoga Sutras, an ancient science of the mind which discusses ethics, meditation, compassion, human relations, and much else. We correspond by regular mail with someone who is in jail. The man I’m teaching is in federal prison for assault.

Teaching is the best way to learn, so I thought studying the Yoga Sutras with someone else would benefit me, too—but I was thinking of the intellectual advantages of study; I hadn’t given much thought to how I would react emotionally when working with a convict. That all changed when I got my first letter from Michael.

Michael has ulterior motives—his participation in the project will probably look great to his parole board. He is an intelligent man who needs to keep his mind occupied, and it makes sense to use his intellectual gifts and curiosity as a motor speeding his release from prison. I hope our studies contribute to his emotional and intellectual development as well as his rehabilitation.

I have other, less positive feelings, too. When I read his letter about his personal history, something he wrote made me wonder if he was a neo-Nazi; at first I wanted to send his letter back and have nothing more to do with him. I know something about violence and Nazis, and I was very scared, angry, and feeling vengeful, too. Most of my husband’s family was killed in Europe by the Nazis before my husband was born. When he grew up, he had no grandparents, only one cousin, and a single aunt and uncle. His family could have celebrated holidays in a telephone booth. I wanted to stay as far away from Michael as I could. Maybe this project wasn’t for me, and I considered giving it up before it had really started. Why was I helping someone who might be the enemy? Some people might even think I was a traitor.

Parts of the Sutras include very good and concrete advice about living an aware, compassionate, and contemplative life, which is my personal goal. Was refusing to work with Michael a way to accomplish this? What kind of yoga lesson was that, for either of us? And my psychotherapist’s superego agreed with the Sutras—escape was faint-hearted and unethical. How can I teach the Yoga Sutras, or work with people who have problems, if I’m too cowardly to take an honest look at myself? This doesn’t imply necessarily having to work with Michael, though—both yogis and psychologists agree that people are not always suited to one another. Maybe someone else would do a better job.

I sat with my feelings for more than a few days. That’s pretty yogic and psychotherapeutic, too—acknowledging and understanding your feelings, living with them, and trying not to react automatically. I talked to my family and close friends. I meditated. I read and re-read Michael’s letter and his questions and answers about the Yoga Sutras. I decided to give Michael a chance; after all, I didn’t know for sure that he was a neo-Nazi.

When I wrote back, I asked him to think more about some of his responses and write about them again. He did. He also wrote that he was a neo-Nazi and had beaten up some of what he called “my people.” I had a lot to think about.

Once, when I was in the supermarket with my then-12-year-old son, David, who was wearing a yarmulke, a man spewed his nasty feelings about Jews in general and about David in particular. He listed the dirty, cruel things he would like to do to David, in detail. He spoke his filthy invective in Spanish, which he assumed I didn’t understand—but I did. I speak Spanish. Fluently. And I told him off in Spanish, fluently. I thought he would be embarrassed, but instead he turned on me and looked like he was ready to hit me.

I wanted to rip his face off, and I thought I could take him, or at least that I had a chance to mess him up—after all, surprise was on my side; he clearly expected me to cower and withdraw. He was little. I am, too, but bigger than he was. Then I stopped to wonder if he might have a knife, and I changed my mind. I remembered that the last time I threw a punch, play fighting when I was a young teenager, I was immediately knocked to the ground by a kid who knew how to fight, who knew how to kick my legs out from under me.

By this time the supermarket manager appeared and told the little, bullying punk not to bother the customers. I paid for my groceries and left the store, David in tow, asking what was going on. I told him. I told him I wanted to mash the guy’s face and I was still angry, but that it’s usually better not to get into fist fights. I looked all around to see if the punk was lurking anywhere, waiting to get me, and felt relieved when we got to our apartment and I closed and locked the door. I was scared.

I admire pacifism and I prefer nonviolent encounters, but between you and me, let’s be honest—I chose not to fight the guy because I knew I would lose, not because I’m a pacifist. My feelings were clear: If I thought I could win, I would have beaten him up and run over his body with my loaded shopping cart.

Michael’s violent history reminded me of this story, of my own savagery, and of my own goals and ideals. We both have a lot to learn.