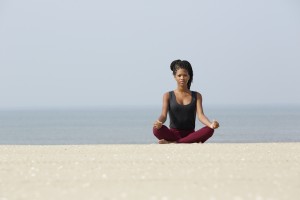 Imagine something that could calm you, ease symptoms of posttraumatic stress (PTS), and rewire your nervous system—and all you have to do is listen to it. Sounds too good to be true? It isn’t. It’s yoga nidra, the ancient guided meditation technique that is currently being used in VA hospitals all across America to ease PTS. (I refuse to call it PTSD, as I don’t think it’s a disorder to have negative reactions to trauma. That seems like a normal reaction. Why pathologize it?)

Yoga nidra, Sanskrit for yogic sleep, is different from other guided meditations in that it not only directs your attention to your body, it uses special breathing techniques and rotates you back and forth from one hemisphere of the brain to the other. The result is an increase in theta brain waves, a greater ability to self-regulate one’s emotions, and markedly reduced rumination.

In yoga nidra, you are relaxed and alert at the same time, though if you are sleepy you will likely fall asleep. If not sleepy, you will likely feel fully rejuvenated after even a 30-minute session. Rest is crucial, as it enhances functioning of the immune and metabolic systems, improving overall physical health and leading to higher energy and fewer colds and infections of all types. Rest also improves mental health by lessening or eliminating insomnia, anxiety, posttraumatic stress, and depression.

Clearly, yoga nidra is an excellent antidote for insomnia and a great relaxation technique. How does it help ameliorate posttraumatic stress? When the body becomes deeply relaxed and the mind is occupied with various yoga nidra activities, the brain can create new calming neural pathways. The old ones are still there, but in time, the new ones eclipse them. When that happens, you feel more emotionally balanced. You may still get rattled by something, but you can rebalance more quickly and easily because your body-mind is so familiar with feeling supremely relaxed.

In addition, yoga nidra employs something called a sankalpa, or intention. This can reflect your true nature, such as, “I am healthy and whole.” Or it can be an intention for a specific goal, what you would like to manifest in the coming year.

The following is a handful of audio files you might like to try. One suggestion: listen to a sample on Amazon or iTunes and see if the person’s voice appeals to you. If not, try a different version.

There are a plethora of yoga nidra programs. Some have music, most do not. It’s great to experiment with different versions, as each brings something unique to the practice.

Only use yoga nidra while lying down, never while engaging in any other activity, especially driving or operating machinery.