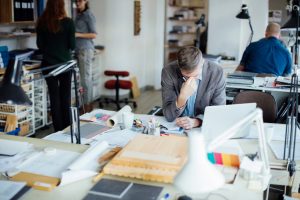 Men who experience chronic work-related stress may be at an increased risk of developing colon, lung, rectal, and stomach cancers, as well as non-Hodgkin’s lymphoma, according to a study published in the journal Preventive Medicine.

The Link Between Job Stress and Cancer in Men

The study, which is the first of its kind, looked at the effects of men’s work stress across the span of a career. Researchers interviewed 3,103 Montreal cancer patients who developed one of 11 types of cancer between 1979 and 1985.

Participants gave detailed work histories, including the types of jobs they had held, whether those jobs had been stressful, and the causes of the stress. Participants held an average of four jobs during their lifetime, but some had more than a dozen jobs.

Does Stress Cause Cancer?

The study did not establish a causal connection between stress and cancer, but it does point to a significant correlation. Its authors caution that it’s possible men with cancer overreported previous stress levels. If, however, the men’s self-reports are accurate, the study strengthens the public health significance of stress.

Chronic stress has been linked to many health issues. Those include chronic headaches, cardiovascular disease, and pain. People with stress may develop unhealthy habits, such as overeating or smoking, that can lead to further health problems. Stress is also linked to an increased risk of experiencing mental health conditions, including depression and anxiety.