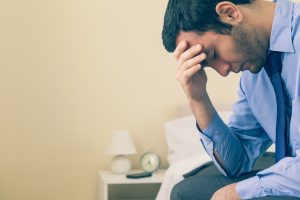 According to a study published in The American Journal of Psychiatry, clinicians should monitor work productivity to assess whether people undergoing treatment for depression may need additional treatment and services. The study found that early improvements in worker productivity could predict depression remission.

To assess the connection between depression and workplace productivity, researchers used the Work Productivity and Activity Impairment self-reporting tool with 331 workers. Each of the workers was enrolled in the Combining Medications to Enhance Depression Outcomes trial and had previously been diagnosed with major depression. Participants had similar levels of depression and productivity impairment at the beginning of the study.

The researchers assessed depression symptoms three months and seven months after the study’s beginning and found workers who had robust early improvements in depression were 3-5 times more likely than the other groups to experience full remission of their depression symptoms. The researchers believe the other two groups with less pronounced productivity improvements may benefit from additional treatment, such as psychotherapy or increased physical exercise (both of which have been shown to reduce depression symptoms). They say these findings point to the value of workplace productivity as an early screening tool for the efficacy of depression treatments.

Lost productivity at work usually accounts for the greatest share of depression’s economic burden. According to the University of Michigan Depression Center, 50% of workers with depression experience short-term disability. As of 2000, depression costs employers $44 billion annually due to lost productivity, and 81% of that is a direct result of poorer performance at work.

Research consistently supports the claim that employer health care costs decrease when workers get adequate depression treatment. For example, a 2000 study published in the journal General Hospital Psychiatry found people whose depression improved over 12 months had reduced health care costs and were less likely to take time off work.

The World Health Organization reports depression is the leading cause of disability worldwide, with 350 million people across the globe experiencing symptoms.