Tend and Befriend Behavior in Women 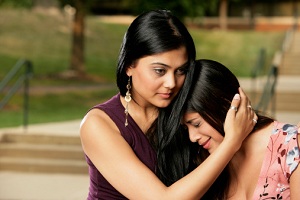 For decades, researchers have assumed that the fight or flight response is how human beings react to stress. This response, with its associated increase in blood pressure, heart rate, and cortisol levels, is viewed as an adaptation that developed over thousands of years. In other words, if a saber-toothed tiger is attacking, you either spear the sucker or run like crazy. But when researcher Shelley Taylor, PhD, of UCLA noticed that women don’t always respond this way, she reviewed the data from stress research studies and found that most of the subjects (both human and animal) were male. Only 17% of research subjects were female, and they rarely responded to stress with a  fight or flight reaction. Rather than considering this data meaningful, the study excluded female reactions because hormonal fluctuations were presumed to negatively affect the results.

Dr. Taylor observed that women often reach out to others during times of stress, whereas men isolate themselves. Women often call a friend, commiserate with coworkers, or ask others for advice, while men typically prefer to suffer in silence. Even female rodents in stress research studies seek out other rodents, while male rodents under stress prefer to be left alone. Although women demonstrate a fight or flight reaction during stressful incidents that arise suddenly, they tend and befriend soon afterward by nurturing their children or connecting with others. Dr. Taylor described this as an adaptive reaction from an evolutionary standpoint. Historically, women needed to be available to care for their young. Fighting or fleeing during times of stress could have left offspring vulnerable and alone. The ability to form strong social connections and an innate urge to nurture would have served a protective function for the species.

While the instinct to care for offspring provides a sensible explanation for female responses to stress, research on hormones provides an additional explanation for this behavior. During periods of stress, males produce androgens, such as testosterone, along with the stress hormone cortisol. However, females produce oxytocin, the hormone often associated with caregiving and attachment between mother and infant. This creates a feeling of relaxation and reduces fear. Although males also produce oxytocin, testosterone decreases oxytocin levels, so males fail to benefit from its calming effects. Research has shown that when female animals engage in tend and befriend behaviors, even more oxytocin is released that further reduces stress.

Why is this important? Dr. Taylor and colleague Laura Klein, PhD, suspect that the tend and befriend behavior in women, particularly as it pertains to social connections, may explain why women outlive men. Research has shown that individuals with strong social connections have an improved quality of life, lower blood pressure and cholesterol levels, and even a reduced risk of death. Women seek out each other’s comfort when stressed. Finding a friend when you are under stress can facilitate the release of additional oxytocin, which helps create a greater sense of calm. Not only do friends offer many forms of emotional support, but it appears that their comfort provides health benefits as well.