Women and Math: Finding the Right Equation for Success 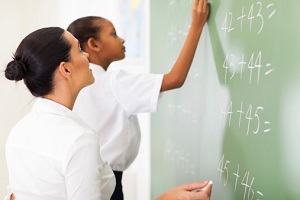 With each new school year, many girls face an uphill battle with insecurity about math. Math anxiety can make itself known through nervousness when tackling a math problem, panic attacks that strike during a test, or even avoidance of math subjects completely. Although not exclusively a problem for girls and women, men and boys are less likely to experience anxiety about math.

Why are many women so afraid of math? Why do numbers on a page cause panic or make some women’s minds go blank? It is decidedly not due to lack of ability. Research has failed to identify any striking differences between men and women in actual math skills. For example, researchers at the University of North Carolina found no significant performance differences in a study of 20,000 4-18 year-old boys and girls. Similarly, a study of 350,000 students in grades 4-8 who participated in a math assessment by the National Assessment of Educational Progress in 2007 also found that girls performed as well as boys.

So if there are no obvious discrepancies in ability, what causes these fears? Some theorists propose that girls’ insecurity about their math abilities may be due to both a lack of encouragement and the dearth of female role models in math-related fields. Nicole Else-Quest of Villanova University reviewed math achievement data for almost half a million 14-16 year-old students in 69 countries. She concluded that boys are not better at math, but are just more confident. Furthermore, girls from countries where there is more gender equity performed better on math assessment tests. Dr. Else-Quest suggested that having female role models who excel in math is critical to their success.

The importance of female role models and confidence in girls’ math abilities was also highlighted in a recent study of first and second grade students. Sian Beilock of the University of Chicago found that math performance among girls was lower when they had female teachers who were uncomfortable with math. However, the same teachers’ anxiety had no influence on the boys in the study. Dr. Beilock concluded that as role models, the teachers may have conveyed their own discomfort with math and influenced the performance of the girls in their classes. In another study, Dr. Beilock found that when girls were made aware of stereotypes about their supposedly inferior math skills, their performance was adversely affected, even in areas unrelated to math. Clearly, assumptions about presumed inadequacies in math can not only affect self-esteem, but impair achievement.

Just as teachers and adult role models can influence math achievement, peer pressure also plays a significant role. As they enter adolescence, girls are often torn between expressing their talents and abilities, as they may have done unashamedly in elementary school, and “dumbing themselves down” to fit in and garner attention from boys. Cultural stereotypes sometimes label math abilities as “nerdy” or masculine, and some girls lack the self-esteem to enter “traditionally” male fields of study. Recent research cited in Child Development concluded that girls rely on female friends when deciding what level math class to take in high school, or whether to even take additional math classes at all. Girls are clearly influenced by whether their peers do well in math or view math as important: this affects self-perception, academic risk-taking, and future career choices.

Despite the fact that women’s math abilities are equal to those of men, many young women continue to downplay, ignore, or avoid these innate skills. Insecurity and anxiety about math can erode confidence in a woman’s perception of her intelligence, and even in handling tasks in everyday life, such as balancing a budget. So what can be done? On a societal level, young girls need exposure to women role models in math and the sciences, where they can see competent, vibrant women who excel in these fields. Recently, actress Danica McKellar has challenged teen resistance to math, with several books and a website, Math Doesn’t Suck, encouraging girls to excel in math. Girls need support so that they can embrace math without fear of being labeled “nerdy” in the process. Negative stereotypes about women’s abilities must be challenged and confronted.

Finally, an anxiety-reduction plan can be implemented when someone is anxious about math. This could include gradual exposure to math-related situations, stress management, and relaxation skills when approaching a math situation or challenging negative beliefs about math. Programs to address math anxiety are often available in guidance departments and college counseling centers. When math anxiety starts to affect self-esteem and erodes feelings of self-worth, though, therapy may be a helpful resource for understanding and managing the stress.