Why Do We Ignore the Red Flags in Our Relationships? 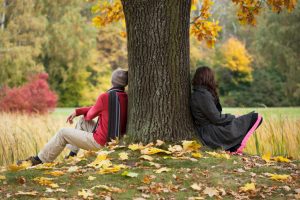 I hear from so many men and women whose marriages and relationships are in crisis. “How did I get here?” they wonder. We all know it takes two to tango. What we may overlook is our ability to ignore warning signs. Upon further analysis of the relationship in counseling, we may wonder what messages we missed and what we can learn from them.

Take, for instance, the woman who is thinking of divorce because she found out her husband is having an affair, one of many she has recently discovered. While her husband’s behavior and choices lend evidence to his lack of respect for her, we can also find small clues along the way that she may have dismissed—red flags, if you will, signaling danger.

One night, a few years back, her husband was on the phone late at night. When she asked who he was talking to, he gave a general answer about work. She immediately felt the hairs on the back of her neck go up, and her stomach flip-flopped. She had an intuitive feeling he was not being truthful. In order to keep the peace, however, she said nothing further.

The next time she felt that same distressing sense, he did not call her for his nightly check-in when he was on a business trip. She had already been uneasy that he was going to dinner with both female and male colleagues and having after-dinner drinks. When he didn’t call her as usual, she called him but got no answer. She texted him but got no answer. She stayed up extra late to wait for his response, but it didn’t come. A nagging feeling told her something wasn’t right, but when he came home and minimized the missed calls and texts as her “overreacting,” she felt foolish for thinking anything could be wrong with their relationship.

Another time, she found a gift of female lingerie in her husband’s gym bag. She chose to say nothing, hoping the lingerie would wind up being a surprise for her. She waited. And waited. She eventually brought it up and received a strange answer that didn’t sit well with her, nor make any sense. Yet she ignored her feeling that danger was near.

When she eventually found out he was having affairs, she exclaimed, “I knew it!”

So why do we ignore the red flags in our relationships? I think there are several answers, and all of them are complicated by love, devotion, and sacrifice.

Often, we don’t want to know the truth. We would have to change something—our lives, the place we live, our finances, perhaps even ourselves—if we found out the truth.

First, we ignore red flags because we are afraid they are telling the true, painful story. We may ask questions of our partner about their behavior and receive answers, but we leave the answers alone even if they don’t quite fit. Often, we don’t want to know the truth. We would have to change something—our lives, the place we live, our finances, perhaps even ourselves—if we found out the truth. That can simply be too exhausting to think about. Even if we are certain it’s happening, we don’t want our partner to say they are having an affair because of what that would mean for us, our families, and our lives.

Second, we ignore red flags because we think our intuition is wrong. It simply cannot be right. So we engage in denial and carry on as if nothing is wrong because it’s easier to deny than to go through the pain of conflict. Surely your beloved partner would NEVER do that to you, right? They vowed they wouldn’t. We ignore our gut feelings, signs of disconnection, inappropriate conversations, and foggy details. We assume, after hearing our partner’s explanation, that we must be “crazy” and their explanation is the complete truth. Challenging our intuition is a dangerous game because it blocks us from knowing primal truths.

Third, we ignore red flags because we have been indoctrinated to believe that marriage and committed relationships are hard work. As a couple, you are supposed to struggle and compromise, right? Marriage and relationships are indeed hard work, but they shouldn’t be so hard that you feel disrespected and at war with your own intuition.

When I ask people in counseling, “What red flags did you choose to ignore?” most often I get a puzzled expression that turns into a knowing look and then to acknowledgment. Upon reflection, most of us know what we ignored and allowed.

For a clearer picture of your relational distress, ask yourself what you are ignoring and denying. Are you brave enough to see the red flags? And finally, do you have the courage to do the arduous work of repair or healing?