When Temper Tantrums Become a Way of Life 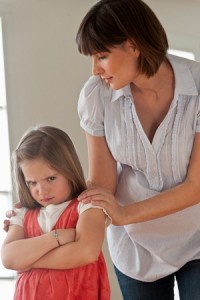 Four year old Sarah throws temper tantrums, won’t go to bed, refuses to take a bath, and is described by her parents as “hell on wheels.” Peter, age seven, won’t take his dishes into the kitchen or perform other simple household chores. Thirteen year old David stays up past his bed time, argues with his parents about everything, and has begun skipping school. His parents just don’t know what to do.

Do any of these children sound familiar? If so, you may know an oppositional and defiant child. Children who have spent years waiting for a family, whether in foster care in this country or in an orphanage abroad, sometimes learn negative behavior to survive. Acting out, they find, is a way to attract attention in an institution or foster home. They may then carry this behavior with them to a new home.

Any child, including one raised from birth in the same family, can develop oppositional behavior. Once a child learns to misbehave as a way of getting his parent’s attention, unhappy parents may make matters worse by not acknowledging positive behavior when it occurs. A self reinforcing cycle begins as the child misbehaves in order to get the attention that positive behavior did not bring.

The next step comes when avoiding an undesirable chore becomes a habit. Peter’s parents asked me, “Why does he act the way he does? He spends more time avoiding doing what we ask him to do than it would take to do it!” From Peter’s point of view, every minute that he is able to avoid doing an undesirable task is time that he can continue to do what he enjoys, such as watching TV or not going to bed.

Oppositional behavior in most children can be effectively treated through a structured program of behavior modification. One caveat, however, is that children with attachment difficulties do not respond to the techniques described below. All of the listed techniques are based on reestablishing a positive relationship between parent and child. Because the child’s behavior is motivated by a strong need to be in control, rather than a desire for parental attention, he or she hears parental requests as demands to be resisted. A very different set of responses is warranted, ones that will be the subject of a future article.

Changing oppositional behavior of well-attached children can almost always be accomplished through a two-step program. Parents must first give their child positive attention in a structured fashion without the child’s having to misbehave to get it. Parents may then move to techniques to end the offending behaviors.

During the first stage, parents should begin by devoting ten or fifteen minutes each day to simply playing with their child. During this playtime, the parent does not give commands, but instead follows the child’s lead in play activities and makes positive comments to the child. This is not the time, for example, to comment on the child’s messy room. The goal of these play periods is to reestablish warmth, connection, and attention in what might have become a contentious environment.

Next, parents should find opportunities to praise the child for appropriate behavior, i.e. for not behaving in specific ways that are annoying. A child who interrupts constantly, for example, might be asked to play quietly while the parent reads a magazine. Every few minutes, the parent praises the child for playing quietly and allowing the parent to read. The time between verbal reinforcements is gradually extended. Parents are advised to watch carefully for positive behaviors that warrant notice and comment.

The second step is to eliminate the undesirable behaviors. Time out sessions, point systems, charts, and other methods are highly effective with oppositional behavior. Point systems can work well, but to be effective these involve monitoring twenty to thirty behaviors and are thus complex to implement well. I strongly encourage parents who think that they need a home reward system to contact a professional to coach them to develop and implement such a system. Time outs, when used properly, are another excellent method to extinguish undesirable behaviors.

Another strategy involves creating situations in which all of the difficulty resulting from undesirable behavior rests on the child’s shoulders rather than on the parent’s. In other words, rather than allowing the child to create a conflict between himself and the parent, make sure that the conflict and consequences affect only the child. For example, a parent who argues with a child about coming to dinner is the one bearing the consequences of the child’s refusal to join the table.

An alternative is to let the child know that dinner will be served shortly, that the child can to come to dinner when he or she is ready. The parents would then provide no further reminders or discussion. However, if supper is over by the time the child gets to dinner, the parent’s response to the child’s question, “What’s for dinner?” can be a simple, “Breakfast.” In this example, the child’s dawdling created the natural consequence of a missed meal. The parent is not nagging, yelling, reminding, or punishing the child. Parents can find creative ways to allow natural consequences to shape the child’s behavior.

Parents whose children are oppositional or defiant might want to consult “Your Defiant Child: 8 Steps to Better Behavior” by Russell Barkley for assistance in structuring a program to change their child’s behavior. If a program implemented at home does not result in significant change within a month, seek professional guidance to determine whether other issues are present.

Parents must find a way to enjoy time with their child before they can end defiant behavior.