When Opposites Who Once Attracted Fall Apart 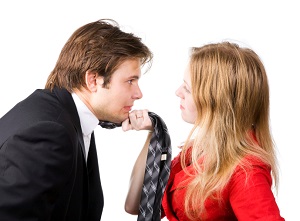 Remember the Police song, “Every Breath You Take”? Some people think it’s a love song—they miss singer Sting’s quiet menace. Here’s what Sting said about the song in a radio interview: “I think the song is very, very sinister and ugly, and people have actually misinterpreted it as being a gentle little love song, when it’s quite the opposite.”

For some time I’ve been working with a married couple—we’ll call them “Felix” and “Christine.” “Every Breath You Take” could be their theme song. They are opposites who at first fused together as one solid mass, but now have lost their attraction; Felix wants out, but Christine doesn’t, so she has put him on a short leash to keep him chained to her, watching him every second.

Felix is reasonable, super rational, and remote. He is pleasant, friendly, but a bit too agreeable. I wonder sometimes what he is really thinking—other people wonder, too. Clearly, he has trouble knowing his own mind and feelings and rarely expresses himself, which he considers a virtue. He thinks he never gets angry, but in fact he acts out his anger without feeling it. He is anxious and disorganized, has limited responsibility in his job, and works below his intellectual capacity, but that helps keep his anxiety in check. It is important to him to feel safe. Christine has a strong life force and is protective of him. “You’re mine,” she says, and Felix feels sheltered … but his shelter is turning into a jail.

Christine is a controlling, aggressive woman who is outwardly sure of herself and very organized and bossy, which Felix once loved, but when the honeymoon was over she increased her demands on Felix. Now Christine needs to know his whereabouts at all times, why he is doing what he is doing, and who he is doing it with; she spies on him to make sure he toes the line, although he has always been faithful. Felix tries proving his love over and over, but Christine never believes him. She calls her possessiveness love. In fact, it is emotional abuse.

Christine’s rage and resentment are almost ungovernable. Her feelings of worthlessness are covered by a punching narcissism that demands attention, admiration, and loyalty. Her wishes are always paramount. These tendencies have grown stronger in her relationship with Felix, who either agrees and appeases her or spends time in the doghouse; Christine cannot abide any other point of view but her own and has a short fuse. She lives by one rule: “You’re either with me or you’re against me.” It’s a poor life that allows for no variation, a Johnny-one-note. But let’s not shovel all the blame on Christine; Felix lived just one note when he was on his own, too, maybe even just a half note. Christine brings excitement to his life.

Last week, Christine told Felix that he has to stop seeing Bob, his best friend since high school, or else. Bob and Christine have never gotten along, and Felix sees him rarely and always by himself. Christine thinks that when Felix and Bob get together, Bob talks against her, but in reality they mostly talk about their high school friends and sports. Christine can’t believe it. In her head, she is the No. 1 topic—people are always talking about her. Felix feels like he is going crazy and has begun to think about divorce.

“You are mine,” Christine tells Felix, “and that means we do everything together. How can you be friends with someone who doesn’t like me? Since I’m not friends with Bob, you can’t be, either. If you really loved me, you would drop him. It’s him or me.” Felix refuses to make a choice, and Christine has stopped speaking to him.

You might say that neither Christine nor Felix is a whole person—each plays out half of the human spectrum: mind vs. feelings. When they first met, they were happy to form this partnership. It was as if they made a bargain—Christine holds the feelings, Felix has the brains—but this kind of bargain never works. Instead of helping each other grow, they make each other worse. Felix never confronts Christine, so she runs all over him. Christine doesn’t give Felix the chance to express himself emotionally.

Now we’re at ground zero: Christine gave Felix an ultimatum and then stopped speaking to him. Felix has been thinking about divorce. Maybe they should break up.