When Love Is a Battlefield: How to Win a Battle Without Losing the War 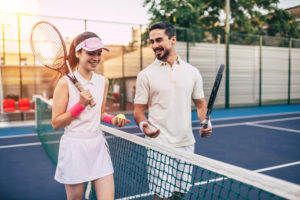 We live in a competitive world. Sports, politics, and business can create the illusion that one person needs to lose for another to triumph. Yet in all these apparently cutthroat fields, people often achieve more by working together than by locking horns. Likewise, when navigating personal conflicts, it can be crucial to consider the needs of all parties involved.

Have you ever seen someone so focused on winning a battle they fail to recognize they are losing the war? Maybe you have been that person. We can all get myopic at times. We may fixate on minor arguments such as where to go for dinner or which route to take to a restaurant. When the stakes are high, it can be really tempting to dig in our heels. Yet doing so is often counterproductive, decreasing the likelihood of getting the outcome we want—assuming an intact relationship is part of the plan.

I see it in my office all the time. Someone can be so concerned with being right that they alienate their partner in the quest for validation. Victory can actually taste pretty bitter when it costs you a significant relationship. You don’t have to passively give in whenever you and your partner disagree. But it is important to maintain perspective about what really matters and how you are most likely to achieve it together.

Recently I came across a study about collaborative goals and connection. Researchers Crocker, Canevello, and Lewis (2017) identified two motivational systems employed in relationships. They defined egosystem motivation as promoting one’s self-interest and positive self-image. Meanwhile, ecosystem motivation is aimed at compassion and support for one’s partner.

The researchers also looked at participants’ beliefs about the relationship. People with a zero-sum belief system perceived interactions as having a winner and a loser. Nonzero-sum beliefs assume it is possible for both people in a relationship to have their needs met.

The study found people with zero-sum beliefs displayed greater self-serving egosystem motivation. This perspective on relationships presumes resources are scarce. It can perpetuate the idea that one person must sacrifice for the other to flourish, fostering competition between partners. It can also create a tendency to focus on superficial, short-term goals over more long-term outcomes.

Ecosystem motivation, on the other hand, benefits both oneself and other people within one’s social network. As the researchers explained, “With ecosystem motivation, people view their social connections as an interpersonal ecosystem that thrives when the needs of the people in the system are met, including their own and others’ needs.” (Crocker, Canavello, & Lewis, 2017).

A belief in nonzero-sum relationships often emerges from ecosystem motivation. Nonzero-sum beliefs presume attentiveness and support can result in a stronger sense of connection and fulfillment for each partner. The ecosystem-based approach promotes compromise and collaboration. The study showed people operating within this framework demonstrate increased responsiveness in their relationships.

The researchers also studied the relationship between compassionate goals (wanting what is best for the other person even if it is not always what is best for you) and nonzero-sum beliefs. They had couples complete surveys and observed them engaging in a 10-minute conversation about a relationship conflict.

Love doesn’t have to be a battlefield. Your partner is not your adversary. You are on the same team.The emerging results showed a zero-sum belief system was predictive of self-interested behaviors. Self-interested actions undermined commitment to the relationship and contributed to avoidance and anxiety regarding one’s partner. Nonzero-sum beliefs correlated with a sense of security and optimism within the relationship. Not surprisingly, people with this altruistic outlook had less distress when attempting to resolve a conflict.

These findings make intuitive sense. It is easy to see how a couple that prioritizes collaborative goals would be happier and have higher relationship quality than one that sees disputes as having a winner and a loser.

So the next time you have a disagreement with your partner, remember that winning the argument may cost you the relationship—or at least eat away at your bond over time. It’s important to keep your priorities in mind. Sometimes getting your way is less important than finding a compromise that shows consideration for your partner’s needs.

Love doesn’t have to be a battlefield. Your partner is not your adversary. You are on the same team. You could live by your own rules and wind up playing a lonely game all by yourself. But if you value and treat your teammate with respect, that person may just become your lifelong MVP.

If you and your partner would like help creating a more cooperative relationship, you can find a couples counselor here.