When Is Sex Sex? Your Answer May Differ from Your Partner’s 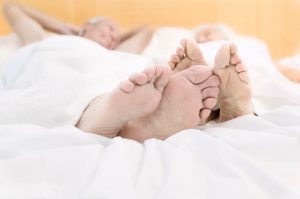 The 16-year-old boy sitting across from me in the therapy room seemed genuinely puzzled when I asked if he was sexually active. He considered the question and said, “You mean by myself?” Before I could reply, he laughed and said, “Of course—since I was 11!”

I clarified that I was asking if he was having sex with another person. He stopped laughing. “What do you mean by ‘having sex’? ” he asked.

Teenagers aren’t the only ones wondering. In 1999, while embroiled in the Monica Lewinsky scandal, Bill Clinton famously argued, “I did not have sexual relations with that woman.” What, exactly, did he mean by that?

It is common for doctors, when seeing a person with sexually transmitted infection symptoms, to ask how many sexual partners the patient has or has had. But these numbers may vary widely depending on what people view as sex. The former president, for his part, raised significant questions about the definition of “having sex.” So the Kinsey Institute, in partnership with Indiana University, began to explore the question many people were voicing as the 20th century drew to a close.

Researchers began by asking a group of college students what it meant to “have sex,” inquiring about specific behaviors. They found no consensus. So they cast their net much wider, speaking by phone to 486 Indiana residents (204 men and 282 women) between the ages of 18 and 96.

I first heard about this at a conference. The presenter threw up his hands when I asked if including people as old as 96 offered a more representative sample than the usual bunch of college students. He said it made things even more confusing, with less consistency of data.

Is oral sex considered sex? Not to about 30% of those interviewed.

Participants, most identifying as heterosexual, considered the question, “Would you say you ‘had sex’ if the most intimate behavior you engaged in was …”; 14 specific behavioral descriptions followed. They were also asked about whether a number of other things made a difference in the definition “having sex,” such as whether orgasm was reached. The results of the study were published in February 2010 in the International Journal of Sexual Health.

I was surprised by some things I learned in that workshop. Here are some that I jotted down:

It certainly isn’t easy talking about sex, but I’m grateful that several hundred Hoosiers did just that with interviewers over the phone. “Having sex” clearly means different things to different people. And this can be a problem. The university’s head researcher said it well: “If people don’t consider certain behaviors sex, they might not think sexual health messages about risk pertain to them.”