When Divorce Is Right 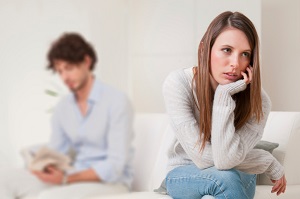 By the time she was 30 years old, “Roberta” was the mother of a beautiful baby boy she was crazy about—but about her husband “Harry,” the baby’s father, not so much; Roberta had more than enough of Harry. They fought all the time, and Harry was about done with Roberta, too. Their fights started getting physical; once, Harry threw a wooden salad bowl at Roberta, striking her in the chest, but this was an isolated case. Neither of their families provided help of any kind.

She felt like a beast of burden—like those donkeys you see in pictures, little burros carrying packages bigger than they are. Caring for her child was one thing, but her husband, who was supposed to help carry the family load, had climbed on her back, too. He was a lot different than he had been when they first got married. Now she couldn’t do anything right. Harry told her that her cooking was lousy (it was). But Harry never made dinner; he wouldn’t even help carry the groceries from the store. He said shopping was a waste of his time. It’s true that he washed the dishes after she cooked, but he often didn’t get around to it until the next day, which was OK before they had the baby, but now it seemed gross. Harry told her that she needed to relax and learn to be less controlling about the baby. He felt trapped with all the new chores that had sprung up like toadstools after a rainy day.

They never went out. After she had the baby, Roberta got fat; she felt ashamed of herself, and she thought Harry was embarrassed to be seen with her. Roberta was scared to leave the baby alone with a hired sitter and they couldn’t afford to pay anybody anyway, so mostly Harry went out by himself.

They were both very young and didn’t understand that Harry was reacting to his feelings about himself and to his new role as father, just as Roberta was learning how to be a mother. Maybe if they had gone to therapy together, this might have been straightened out, but they were both too scared. They never discussed it.

Harry felt like Roberta was turning into his mother, who was overbearing and demanding. He fought with Roberta, and he fought with his mother, too. In fact, he carried on long and loud phone arguments with his mother almost every day, which turned Roberta off. She had a new office mate at work, and their friendship was getting romantic.

Roberta had been married for only a few years, but she was afraid that marriage would be the death of her. She found a lawyer and started divorce proceedings. She also started therapy so she could make sure she never made such a serious mistake again. It’s interesting that she was able to find low-cost treatment for herself without too much of a problem, but that she and Harry never looked for a marital therapist. They didn’t even think of it. They both gave up on their marriage—perhaps it just wasn’t right for either of them.

Roberta felt guilty about wanting to get divorced when she had a young child, but she told herself that someday her son would grow up, and if by any chance he found himself in a similar horrible situation she would want him to get divorced, too. So she was a role model for how to live through a certain kind of tragedy.

She felt terrible when she turned 30—what had she come to? But her friends got together and threw her a 30th birthday party, featuring a spectacular chocolate cake covered with flower blossoms in many colors, like a fancy lady’s garden party hat. Roberta licked her wounds and made her life over. She worked hard and long hours, but she felt empowered by her discovery that she was very capable. Life was easier without Harry around.

Meanwhile, Harry had thought things over, wanted to get back together, and was crushed when Roberta said no. He loved Roberta and his young son, so for his son’s sake he started working on himself so he could be a good father. His own parents had not provided decent examples for him, but he was learning.

Years later, both Harry and Roberta found other partners and made good marriages. Perhaps they had been too young the first time around; their second partners were easier to get along with, and they were, too. Now they were determined to make good.

Despite the many conflicting feelings that go along with divorce, sometimes it really is the right choice. Was divorce right for Harry and Roberta? They thought so. What do you think?