What My Gay Son Taught Me About the Orlando Massacre 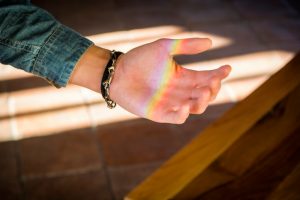 Coming out to heterosexual parents is announcing, “I’m not the child you thought I was. I’m not one of you.” For an LGBTQ child, it doesn’t bring you closer to the family; it separates you.

Some may say they knew; others will be shocked, angry, or sad; some will ask, “Are you sure?” After the initial reaction, there is a period of adjustment. If you’re lucky, your family members will be loving and accepting. If not, you may get rejected for being who you are. You may even get thrown out of the house.

The nightclub in Orlando was a safe, even sacred space—a refuge for LGBTQ family. After the massacre, even that was gone.

That’s what my gay son just taught me. That’s why this is beyond horrific. It was a violation of the one space that, to the LGBTQ community, was home.

My husband and I, along with our son, attended the Baltimore City vigil to support the 49 people who were gunned down in Orlando and the survivors. It was a beautifully diverse group: young people, older people; gay, straight, transgender; black, white, Asian, Latinx; Hindu, Muslim, Jewish, Christian, and atheist.

I watched the expressions of pain on their faces, felt the fear of hatred and violence, and witnessed up close how discrimination manifests itself. The tears of these sweet, loving people who came out to share their humanity, love, and grief overwhelmed me. They just want to be who they are, and love whom they love, without being under the microscope of people who have nothing better to do than judge and spread hate.

At the end we were asked to hug the people around us, whether we knew them or not. I felt connection; I felt humanity; I felt safe. Then it was over—back to the real world.

What do we do after the horror of Orlando?

I learned a lot that night. Now I know I have to work even harder to speak up, to help others understand more about the LGBTQ community. I have to tell our story more often. That’s what changes hearts and minds—one person at a time, one conversation at a time.