Axes and Lambs: If You See Something, Say Something 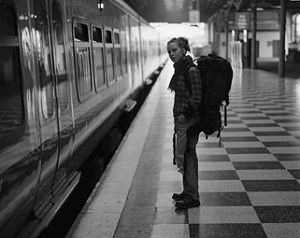 Last month we talked about infidelity and the abuse of trust, using the example of a marriage where multiple infidelities had occurred. How could the partners ever trust each other again? Sometimes it is possible, and the relationship can strengthen and deepen. Other times there is no reason to continue.

Abuse of trust is a terrible betrayal. We expect people to be kind, courteous, and honest, but not everyone treats others as they would like to be treated themselves. Today I’d like to examine the abuse of trust between strangers.

A few years ago, when I was riding home on the IRT in New York, a young woman, I’ll call her Norma, was sitting across from me, with a strange and frozen expression on her face. Next to her was a rather dirty man with his arm casually arranged on the back of the seat they were sharing, just close enough so that his fingers occasionally, seemingly accidentally, brushed Norma’s arm. At first these touches seemed unintentional, and she politely tried to ignore them, but as they continued and increased in their intensity, she became more flustered and frightened, while the man seemed pleased. Her courtesy coupled with a certain amount of timidity was her downfall, and exactly what the abuser was counting on.

I glared at him so he would know I was on to him; then the train came to a station and filled with people, and the next time I could see across the aisle the man had left. Norma was still there; we exchanged glances and I asked her if she was OK. She started to cry; she was upset, frightened, and angry with herself as well as the perpetrator.

Norma said she was thinking the whole time the abuse was going on, “Is this really happening? Maybe I just think it’s happening. Should I say something to him? What if I’m wrong and I’ve accused an innocent man and nothing at all is happening. I’ll hurt his feelings. He’ll get mad. What’s wrong with me?”

I told Norma that I had seen the whole thing, or much of it, and that it had really happened. Often the victim of this kind of abuse is not entirely sure what is real and what isn’t, especially when the reality is ugly and threatening. Partly that’s a symptom of posttraumatic stress. Partly that is the abuser’s setup, a con game to mess with the victim’s head and not just the body.

Contrast this with the experience of a woman named Janet, who was accosted by a flasher on another train in NYC. He wore the requisite trench coat, opened it briefly and flashed her. He was banking on her silence—he figured she’d be too scared and embarrassed to say a word, submissive like Norma, and most people, but he didn’t know Janet. Janet ripped open his raincoat and said in a really loud voice, “Look everybody! Would you just look at this! Just take a look at this little thing.” Lucky for her, the man slunk off the train. He could have been violent; she could have been hurt.

Then we have a book named Lamb, written by Bonnie Nadzam, about the seduction of a child, who is led along by a clever psychopath, a lonely man who seems to ask for the child’s consent and manipulates her will as he kidnaps her and keeps her prisoner for a period of weeks. She is lonely, too, and sometimes the two of them seem really connected in a healthy way, if only for moments. These bits of connection are partly what keeps her hooked. And the abuser knows how to dole them out, just enough to keep her wanting more.

That’s how abusive relationships work. There is just enough kindness or seeming kindness to keep the victim engaged with the victimizer. The world breaks into axes and lambs, like the heroine in the book of that name.

Over the past few months we’ve heard about the many young boys raped and abused at Penn State by their coach, Jerry Sandusky; the crimes were covered up repeatedly, not only by Sandusky but by the very famous and previously revered Joe Paterno and Penn State administrators. The Nittany Lions football team was rich and powerful and earned big bucks for everyone involved, while these crimes created a longstanding culture of predatory behavior.

Sandusky’s MO was to find naive young boys, dazzle them with his fame and attention, win their affection, and then rape them. The boys were scared to speak up—which Sandusky depended on, as most predators do. His crimes were witnessed, but he was protected by Penn State—and allowed to continue his vile behavior. The boys were not moneymakers like Sandusky and his crew, they were just regular boys, so their lives were not important. Sandusky and his protectors deserve long prison sentences.

We need to borrow some of Janet’s forcefulness, although not necessarily her actions, but we can speak up and stay safe. There’s a sign in the NYC subways these days, “If you see something, say something.” Speaking up protects all of us.