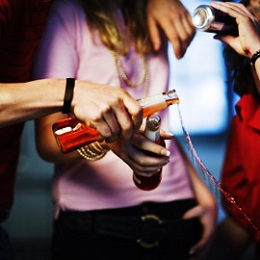 He was angry, aggressive, destructive, suicidal, and blacking out. His parents found pipes, marijuana, and pills in his room, and they suspected that he had been using other drugs. The family got into fights about his drug use and tried different consequences to get him to stop using, but his problems worsened, and he kept using until he was arrested for possession.

She was unhappy, feeling that no one liked her and that she could not be popular without a little help. At the dance, she took a friend’s Ritalin for some extra energy and pep, to be the life of the party. Then she experienced chest pains, heart palpitations, and vomiting, which led a chaperone to call an ambulance, and she went to the emergency room.

Both of these teens were using drugs and hit their personal “rock bottom” – collective actions that had significant consequences. Often teens and adults will continue using drugs or alcohol until the consequences are so great for them that they choose to quit using drugs. Parents want to help when they see their child spiral out of control. As soon as you think that your kid has a problem with using substances, say something. Do not yell, but ask them what is happening and if there is something you can do to help them. The sooner you know something, the better. Resources include counselors, pediatricians, rehabilitation centers, hospitals, family doctors, residential treatment centers, wilderness camps, and Alcoholics or Narcotics Anonymous.

Residential treatment, in many cases, should be considered the “last-ditch” approach to helping a child with serious problems. If the child’s problem is truly severe, removing them from the home environment for a short period of time may help them to become sober and start thinking clearly about  what is needed to help them. Studies of different treatment approaches have found that residential treatment is effective for individuals with a long history of addictive behavior. The federal trade commission has published a guide to help parents and caregivers decide which residential treatment program is right for their child and family.

Therapeutic wilderness programs are a subset of residential treatment, typically hosted as a camp, where teens are challenged by living in the outdoors and through that challenge get to understand themselves and their problems from a different perspective. Wilderness programs typically offer individual, group, and family counseling within their programs along with the unique outdoor challenge aspect. The National Association of Therapeutic Wilderness Camps hosts a list of member programs with links to their websites for families to get information about each program.

Sometimes a support group such as AA or NA can help a teen toward sobriety. These are 12-step programs that work to help people remain sober once they have made the decision to quit using. Once someone has quit using, they can attend as many meetings as they want to, and many programs encourage participants to attend 90 meetings in the first 90 days and find a sponsor. To find an AA meeting, go to www.aa.org for a list of local meetings and more information about AA.

No matter the situation, a child that is using drugs or alcohol needs help to deal with their use and to treat any underlying symptoms that led them to begin to use in the first place. If you are concerned about your child, seek out information from knowledgeable pediatricians, family doctors, counselors, and therapists. When talking to your kid, try to stay calm and show them your concern. Anger may only make the situation worse, as your teen may not want to turn to you for help. Help them to understand that they have to make a decision to give up using drugs and alcohol in order to turn their lives around. Once they make that decision to get help, there are many resources for families and teens to help them stay clean and sober.