The Voyage to the Islands: Integrating Experience in Therapy 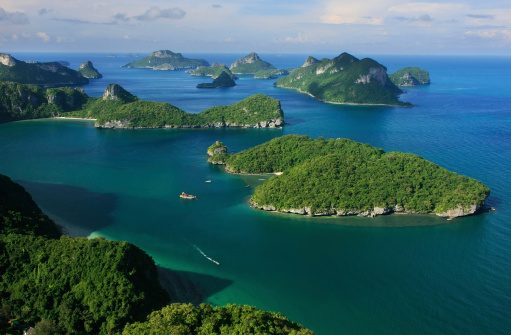 We carry our answers within us. It’s a matter of realizing that, of looking at things from a different perspective, of putting two and two together. We’re often aware of things one at a time, which, brought into relationship with each other, open new vistas. Stories that remind us of this can helpful.

There’s a theme in mythology and literature related to this: the voyage to the islands. Versions of this include Homer’s Odyssey, the voyages of Saint Brendan, the seven voyages of Sinbad, and, more recently, C.S. Lewis’ The Voyage of the Dawn Treader. In this type of story, the hero or heroine sets out from the mainland, that place where a person spends most of his or her waking life. Sailing over the endless waters, the person comes to a series of islands. Sometimes these are places the person has heard of but never seen. Sometimes they’re found for the first time.

The image of islands separated by the blue horizon suggests a state where this area of awareness isn’t connected to that area of awareness. The actions we take while in one state of consciousness are assessed in a completely different state, where they don’t seem connected to anything we can account for, from that second state. We can see this in operation among people we know, sometimes from news stories.

We sometimes live amid islands of experience that can’t be seen when we’re back on the mainland. Visiting these separate islands in therapy connects them and creates a unified territory, sometimes for the first time. In the cases we’ll consider below, names have been changed and all uniquely identifying material has been screened out.

Bob comes to therapy. He has high levels of anxiety related to his health. After reviewing scope of practice with him—I can work with him on the anxiety but am not qualified to address health-related issues—we begin our work. Bob describes his sense of dread for what the future will bring. Because of his compromised immune system, he’s vulnerable to a wide spectrum of opportunistic infections: pneumonia, lymphomas, fungal infections. We address his anxiety, identifying the triggers and developing coping techniques.

As trust gets established between us, Bob tells a second story: He sometimes chooses not to take the medications he’s prescribed. When he tells this story, there’s a very “different” Bob in my office from the man who fearfully scans the horizon for what’s coming next. This Bob doesn’t take guff from anybody, even doctors. He makes his own decisions about what goes into his body, and he definitely is not OK with the side effects of some of the meds. He says with conviction, “No one knows my body like I know it.” He doesn’t take the findings of his regularly scheduled blood tests all that seriously. “Blood panels are always changing,” he assures me confidently.

As we continue working, Bob tells a third kind of story. This one doesn’t show up very often, but when it does, it feels impactful. And again, as he tells this story he’s “another” Bob. When he was 10, he lived for a while in a foster home. There, he experienced abuse at the hands of his caregivers. He was later reunited with his birth family. When he tried to talk with them about what happened, he was silenced. No one wanted to hear about it. As he tells this story, he’s at first frightened and confused, then mournful, and finally bitter. “There was nobody in my corner,” he recalls. “Nobody had my back.”

We sometimes live amid islands of experience that can’t be seen when we’re back on the mainland. Visiting these separate islands in therapy connects them and creates a unified territory, sometimes for the first time.

When Bob discusses each of these episodes of his life, he seems to be aware only of that episode. His associations and feelings, and his resulting behaviors, make sense within that episode, but seem disjointed from the others. It’s as if each one is an island of awareness, and when he’s there he doesn’t access the viewpoint or associations of the others. And to be clear here, we’re not talking about dissociative identity issues. Bob presents with a single, intact personality. But he’s thinking about things one at a time that are really all true at once.

We address this in our work by my referring to the other stories when Bob tells any one of them. When he tells me he knows what’s best for his body, I acknowledge this and connect it to the betrayals he experienced by authority. When he describes his anxiety about the future, I wonder out loud how this relates to the fear he felt as a little boy, and his occasional decisions to reject his doctor’s advice. In this way, what were originally separate islands become part of the mainland. Whatever decisions Bob makes about his health care, they’re likely to be better informed.

Perspective on the Horizon

Lena comes to therapy following a romantic disappointment, to which she’s responding with depressive symptoms. She’s in her early sixties, and tells me that she’s never had a partner relationship. She identifies this as a trigger for her depression, adding to it her awareness of aging, the shortness of life. In this context, each time she says “never,” it resonates against the future as well as the past. It feels bleak, hopeless, and global.

So we focus at first on developing coping skills for depression. But as we work, Lena returns to the narrative of never having been in a relationship. In addition to experiences of loneliness and longing, this includes the stories of relationships that might have happened, almost happened, and didn’t happen. There’s a sense here of being on the mainland. This story is where she spends the greatest part of her time.

One of the coping techniques is to spend time focusing on areas of her life where Lena has relatively high levels of satisfaction. These include her social network—she has enough friends on Facebook to populate a small city—and her career. Her work lets her travel all over the country, and she’s good at what she does. As she describes the conferences she attends, the presentations she gives, the interactions with colleagues and new contacts, Lena becomes animated. A vibrant and optimistic woman sits across from me. We’ve set sail.

She tells me that from time to time she meets someone at a conference “and there’s chemistry.” The person with whom she had the greatest chemistry was Robert. They only met at conferences, never in the cities where either of them lived. This was a passionate and mutually satisfying relationship that went on for close to five years. And it didn’t show up in her story of never having had a relationship. This island couldn’t be seen from the mainland.

I reflect this to Lena, who seems surprised by it. We talk about the nature of islands—that they’re not connected, so you tend to visit them one at a time. I ask her what happens to “never” when we bring the relationship to Robert in contact with it. Lena notes that “never” shrinks a bit. There’s a sense in which it’s still true—she would like to share a household with a partner. But the original feeling of hopelessness decreases, and she’s sustained by the new recognition that more is possible than she originally thought.

As in the tradition of the voyage story, the result of bringing these previously isolated experiences into relationship with each other and with what we’ve been calling the mainland expands a person’s sense of his or her world. Negative experiences aren’t as overwhelming, and strengths are more readily accessible. Our lives seem to be less imposed on us by circumstances than they are choices in which we participate.