The Tiger Hunter: Finding the Courage to Make Choices for Yourself 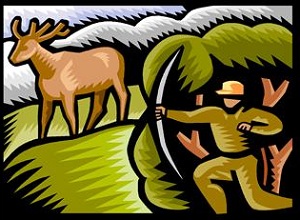 I created this sad story many years ago to remind people that continually reflecting, updating, and assessing one’s values, actions, and beliefs is vital for one’s happiness and well-being.

I hope you enjoy this story.

There was a village in which only the best hunters lived. It was known by people of all lands as the Hunter Village.

In this village, a person’s value was judged by what this person had caught or killed, and the most prized prey was the tiger. Those very few who had killed a tiger were most respected and lived an affluent life. Being able to kill a tiger, therefore, was the most prominent aspiration and goal for all kinds in this village.

Among the villagers, there was a couple, a Master Hunter couple, who had killed four tigers. They were revered greatly by the villagers.

The couple had a child, Na. Ever since Na was born, the couple taught Na everything they knew to ensure that Na would become the best hunter, kill tigers, and live a respected and affluent life.

Na became the best hunter the village had ever seen.

But the true test of Na’s worthiness and skills was the first tiger-hunting trip. Every young hunter had to go to the Sa Mountain alone to hunt tigers on the day of his or her 18th birthday. In the past 20 years, no one had succeeded. The whole village hoped that Na would change the bad luck and maintain the Hunter Village’s name.

Na packed everything and went to the Sa Mountain. Na had the best awareness, skills, tools, and knowledge.

“If a tiger shows up, I know I will kill it. Then I can prove my worthiness, and I can save my village’s name.”

A phoenix flew by. Na looked at the phoenix, and did nothing. “Get away!” Na shooed the phoenix away, it was not a tiger.

Then a dragon walked by, slowly. Na took a look at the dragon, “This is NOT a tiger.” Na shooed the dragon away. Na remembered that the village elders said, “Killing a tiger is the only way to prove your worthiness.” Na knew that taking this unseen animal back to the village would make Na the laughing stock. “What is this?! Only tiger is worthy.”

A goose stopped by and laid a golden egg in front of Na. Na was annoyed by the goose, “I am here to hunt tiger!” Na shooed away the goose, “you are blocking my view.”

For days, Na waited, waited, and waited for a tiger, for this was the only opportunity to prove Na’s skills, to honor Na’s parents, and to be respected by the villagers. “Just one tiger, just one.”

Na encountered many different creatures, but all of them were chased away, for they were no tiger.

Finally, Na had to leave the mountain and go back home. Na’s time was up.

Na went back home empty-handed. Na did not catch or kill a tiger.

People in the Hunter Village decided Na was a failure. Na’s parents kicked Na out of the house.

For the rest of Na’s life, Na continued searching for a tiger, to prove Na’s worthiness and to earn respect from other villagers.

A review of the historical record revealed that Na’s parents killed the last of the tigers in that region.

Some questions I ask people, after telling this story, include:

Cultures impact us in so many different ways, and continual reflecting (“is this what I really want or what the culture dictates for me?”), updating (“this worked before, but does this work for me and for the current context?”), and assessing our values, beliefs, and behaviors are essential for self-understanding and living to our full potential.

Then I moved to the United States, and Angelina Jolie became a sex symbol. All of the sudden, people endured pain and spent money to make their lips fuller. The sales representative in the cosmetic counters could not stop admiring my full lips, “Few Asian Americans have full lips like you, you are so lucky!”

I wish you the wisdom to recognize your “tigers” and make your own choices. Making your own choices takes strength, courage, and wisdom. Enjoy the journey and know that, when you do not focus on killing a tiger, you will see all the other animals.