The Relationship Between Addiction and PTSD in Combat Veterans 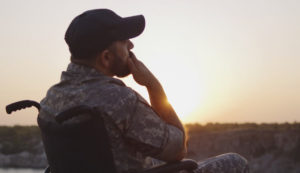 Serving your country can mean giving your life. This is the role of many soldiers all over the world. To serve means to put your life on the line; meanwhile, survivors may have to deal with the trauma they faced in war zones for the rest of their lives. Often, this trauma can lead to addiction or even death, but not the kind typically seen in war.

Why Do Veterans Develop Addiction?

Why do so many veterans turn to substance use? Many individuals who have served in the United States military struggle with addiction, whether to drugs, alcohol, or both. Veterans who take part in combat missions are likely to be diagnosed with posttraumatic stress disorder (PTSD). This condition often leads to depression. In order to avoid getting into that state, many try turning to alcohol or drugs to temporarily improve the situation, but they don’t. Traumatic events often trigger drug and alcohol abuse that can lead to the formation of an addiction.

Traumatic events often trigger drug and alcohol abuse that can lead to the formation of an addiction.

It has been reported by the White House Office of National Drug Control Policy that 7.1% of veterans who were deployed in Iraq and Afghanistan from 2004 to 2006 developed a substance abuse disorder. The survey concluded that the problem stemmed from compulsive abuse of controlled substances after they had been deployed. In the same report, many veterans were reported to show symptoms of mental health symptoms like intrusive thoughts and flashbacks of traumatic situations they had witnessed, experienced, or felt. They were constantly on high, intense alert with generalized anxiety and depression.

Often, these soldiers may feel they are unsafe no matter where they go or what they do, which negatively impacts their day-to-day lives. Not only that, but their families may also experience the same anxiety and worry.

Many veterans with addiction are also at risk for insomnia, traumatic brain injuries (TBI), relationship problems, and suicide.

Heavy alcohol drinking has existed in the military for a long time, but for those who were more recently deployed to war zones in Afghanistan or Iraq, alcohol consumption has spiked. One reason for this is PTSD, also called “battle fatigue” or “shell shock,” since it is caused by extreme stress after witnessing tragic or startling events on the battlefield.

Veterans may also develop PSTD if they experienced any sexual abuse. According to a study published by the American Psychological Association, anywhere from 23% to 33% of female military veterans reported sexual assault during their term in the military. Many veterans may turn to substance and alcohol misuse to either self-medicate or numb their pain and forget the traumatic experience.

About 20% of veterans are reported to binge drink once a week. However, for those who have been exposed to combat, the rates are even higher. In fact, from 2003 to 2009, about 56% of veterans experienced alcohol addiction at some point. In some cases, veterans who are prescribed medications for PTSD and pain eventually turn to illicit drugs such as heroin. Not only is heroin often cheaper than prescription medication, but it may also be easier to obtain. It’s easy to see how many veterans become addicted to substances like heroin after they have been discharged in the service.

Besides alcohol, painkillers and other prescription medications are among the most abused substances by veterans. This is because some veterans become addicted to painkillers that are prescribed to treat combat-related pain and injuries. Over time, they may become dependent on the substance, start to require more to get the same effect, and go on to develop an addiction.

Veterans may also find that they develop such a high tolerance that, when they decide to quit using, withdrawal symptoms become more intense. Some physicians avoid this situation by prescribing non-addictive antidepressants like Zoloft and Paxil. Because of this, many advocates are now pushing for better and tighter regulations on prescribed medications that can lead to addiction. Some of the most commonly abused painkillers and antidepressants by veterans are:

Many veterans have a hard time overcoming addiction because of their dependence on drugs and alcohol. Combine that with their withdrawal symptoms and PTSD, it could seem nearly impossible to stop using substances.

It may seem hopeless, but no matter how difficult the situation is, addiction can be fought and effectively treated. If you are a veteran in need of treatment for addiction, you can make use of inpatient and outpatient rehabilitation programs for veterans at recovery centers. This can be achieved through the Department of Veteran Affairs, which can assist war veterans who cannot find an affordable treatment program. The Department of Veteran Affairs offers the following programs:

When substance use becomes a compulsive response to pain, it can cause feelings of helplessness and fear. Addiction may often increase emotional pain in the long run and can negatively impact your health, relationships, and other parts of your life.

If you are a veteran dealing with PTSD and substance misuse, it’s important to seek help. Keep in mind that you may not only be doing harm to yourself, but to those around you. Contact a treatment specialist so they can create a rehabilitation program for you. Take control of your life once more and start again—it’s not too late to seek help.