Teen Tech Use and Mental Health: The iGeneration’s Digital Dilemma 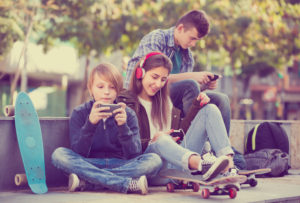 Born in 1981, I entered adulthood along with the advent of the World Wide Web (which is why I still know what the “www” signifies). My generation climbed the playground ladder of technological connection: we moved from glacial dial-up, to DSL, to cable or “high-speed Internet.” From there we traveled all the way to the current peak of palm-sized modems. For my generation, there is an experiential balance to notions such as digital versus physical and public versus private. “Talking” still means speaking in-person to someone in physical proximity. It does not equate to a status update, e-mail, Tweet, or private message.

But these distinctions have become blurred in the last decade. In fact, they seem to be on the brink of extinction in Western dialect. The autonomy my generation sought and obtained came with relative costs and risks. We drove cars recklessly, experimented with alcohol and drugs, and had sex early. Hyper-independence has its downside, yes. But the other extreme has consequences, too.

There is an intuitive, social consensus that the behavioral choices of American teenagers have transformed dramatically in the 21st century, compared to previous generations. Teens check their phones more than 80 times each day. The average high school senior in the U.S. spends at least 6 hours a day on their mobile devices. Has a new, digitally immersed generation of children emerged (or, it can be argued, withdrawn)? What are the mental health implications of this new state of being (hyper-connected but physically alone)?

The term “iGen,” according to Twenge, describes babies born between 1995 (the year the Internet was commercialized) and 2012. This group makes up nearly a quarter of the U.S. population. These children, teens, and young adults tend to lack a cognitive contrast between online and offline. Safety is as important emotionally as it is physically. Confrontation in a most minimal form is foregone as safe spaces for self-expression are required. They grow up slowly, are raised to value safety, and are frightened by the implications of income inequality. When compared to previous generations, these young people may get along better with their parents, start drinking alcohol later in life, work less, participate in fewer religious activities (and are largely non-believers). They also fight with each other less—as seen in declining rates in homicide.

But the interpretation of this research invites a list of pros and cons. On one side, people claim children are over-protected and less independent. The other side makes note of the decline in teen pregnancies and accidental deaths as a result of a slower developmental path. Opinions and rhetoric aside, the most daunting information pertains to the mental health outcomes. Rates of depression, anxiety, and suicide have skyrocketed for iGen’ers.

This group has come to adolescence in a time when their primary social activity is staring at a small rectangular screen that can, in a sense, like them or reject them. The devices they hold in their hands have both extended their childhoods and isolated them from true human interaction. As a result, they are arguably both the physically safest generation and the most mentally fragile. (p. 312)

Twenge (2017) addresses the digital elephant in the room by naming the culprit: smartphones. Facebook opened their digital doors to 13-year-olds in 2006 (as the iGen neared adolescence). The iPhone was released in 2007. By 2011, the dissemination rate (50% of the population) of smartphone technology had saturated the market. iPhone in hand, the iGeneration entered their teenage years with unlimited access to social media sites. Data confirms that two or more hours per day of screen use for the iGen is linked to decreased sleep, increased loneliness, depressive symptoms, and higher suicide rates. The trends are also remarkably consistent. Loneliness, depressive symptoms, major depressive episodes, anxiety, self-injury, and suicide are all on the rise, mostly since 2011. iGen is crying out for help, and we need to listen. (p. 302)

Perhaps the real poison is embedded within the digital realities teens are cohabiting. True community, fellowship, and empathy tend to lack a consistent presence online. Extrinsic values—success, materialism and never-ending acquisition—are often promoted, and self-presentation is viewed as the vehicle for happiness.

The data conveyed suggests iGen’ers are emotionally developing at a slower pace than previous generations. They live in a globally unique culture. It is inescapably individualistic and self-focused, with material success and the pursuit of happiness at the center. “Culture of Me” teenagers now have a “slow life strategy.” This is likely due to “smaller families and the demands wrought by increasing income inequality” (p. 42).

A broader perspective on the societal implications of Twenge’s findings integrates the developmental, financial, and psychological trends. Parents have the time to cultivate each child to succeed in the newly competitive economic environment. This might take twenty-one years when it once took sixteen. The cultural shift toward individualism may also play a role. Childhood and adolescence are uniquely self-focused stages, so staying in them longer can allow for greater cultivation of the individual self.

Consider for a moment how smartphone use can be compared to alcohol use. For many adults, a beer or glass of wine is harmless to the body. However, no sensible human being would give a beer or glass of wine to an infant. The effect of consumption could be lethal. In the same respect, it appears that smartphone use is not inherently dangerous. For some, though, overuse can become problematic. For many children it is unhealthy.

Perhaps the real poison is embedded within the digital realities teens are cohabiting. True community, fellowship, and empathy tend to lack a consistent presence online. Extrinsic values—success, materialism and never-ending acquisition—are often promoted, and self-presentation is viewed as the vehicle for happiness. Cognition is now equated with personhood. The applications, web articles, and social networking sites present and function based on the notion of a concrete, separate self. A person viewing them is led to believe they reside in the center of the universe. Everything that happens is about them. What do “I” want? What is good for “me”? These are the self-absorbed choices of a new iGeneration, and these choices are causing harm.

There are protective factors that can help shield children from the effects. Participating in sports or other outdoor activities, having hobbies that don’t involve screens, and spending face-to-face time with friends are all likely to have a positive impact. If your child is struggling with any of these effects, the support of a counselor may also be beneficial.