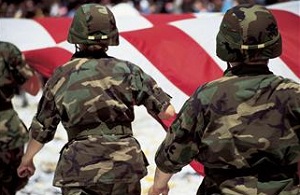 Suicide is still a prevalent and unsettling issue in the military, despite suicide prevention efforts.

The total number of suicides in 2011 was 165, and so far there are 116 potential suicides in 2012, according to the U.S. Department of Defense press release. Fifty suicides are still being investigated for 2012, but 66 cases were confirmed.

The Washington Post reports that July was the worst month for suicides in the Army since 2009 (the first year these statistics were released). With the current suicide rate, there could be around 200 suicides for active duty soldiers by the end of the year, according to the article. Other sources say suicide is one of the top 10 causes of death in the Army and could possibly be the number one cause.

September will be Suicide Prevention Month, and the military is trying to improve its suicide prevention methods to reduce these numbers.

“I do believe suicide is preventable,” said Gen. Lloyd J. Austin III, the vice chief of staff of the Army, in the press release. To combat it effectively will require sophisticated solutions aimed at helping individuals to build resiliency and strengthen their life coping skills.

“Ultimately, we want the mindset across our force and society at large to be that behavioral health is a routine part of what we do and who we are as we strive to maintain our own physical and mental wellness,” he said.

The press release includes some resources for soldiers and families, including the National Suicide Prevention Lifeline number (1-800-273-TALK (8255); http://www.suicidepreventionlifeline.org). The Army also has its own suicide prevention website: http://www.preventsuicide.army.mil.

The Army is promoting its own suicide prevention events that help “celebrate life,” with a theme of “A healthy force is a ready force,” according to an article on the Army’s website. There is also a behavioral health study underway that will focus on improving “the health of the force by collecting data to create an intervention for Soldiers focused on reducing the stigma of seeking behavioral health treatment,” according to another Army article.

There are additional new prevention methods for suicide, including research looking into making a nasal spray that would deliver “a specific antidepressive neurochemical to the brain and help calm suicidal thoughts,” according to a CNN article.

Another option is promoting even more suicide prevention hotlines. For example, there is a “pilot call-in program” at New Jersey’s University of Medicine called “Vets 4 Warriors.” Veterans work at the call center, and they answer calls from National Guard and Reserve service members who are contemplating suicide. The number and website are: 1-855-838-8255; http://www.vets4warriors.com/services/.

Mental health experts have more information on prevention techniques and treatment methods for soldiers who are experiencing suicidal thoughts.

Elizabeth Waterman, a licensed clinical psychologist at Morningside Recovery in California, said in an email that there are multiple factors contributing to the increase in suicides in the Army.

“An increase in suicide rates among active duty troops is likely related to many years of continuous stress resulting from the wars in Iraq and Afghanistan,” Waterman said. “There is a negative stigma associated with asking for help with depression, suicidal ideation, and other mental illness within the armed forces. This stigma prevents many active duty troops from seeking appropriate mental healthcare, and the problems remain untreated until they are no longer able to live with them.”

Although there are current suicide prevention services in the Army, it doesn’t appear to be enough, by looking at the statistics.

“Getting help to suicidal soldiers in unstable areas oversees is likely very challenging,” Waterman said. “Access to mental health treatment during active duty may be limited, and/or the negative stigma associated with mental health problems may prevent soldiers from asking for help. When people do not reach out for help, it is difficult to address the issues they are experiencing.”

“Suicidal thoughts can be very shameful and overwhelming to individuals, and thus, the individual may prefer to avoid or deny the issues to avoid negative judgments from others,” she added. “In some cases, soldiers may fear negative repercussions from superiors if they show any signs of weakness, and they hide the problem to prevent consequences.”

Waterman has four tips for soldiers who are experiencing suicidal thoughts, in addition to seeking help from a mental health professional through therapy sessions and potentially taking medication if suggested by that professional:

1. They can acknowledge to themselves and others that the suicidal thoughts are occurring and rate the intensity as the thoughts arise on a scale of 1 to 10, with 10 being most intense and signifying a need for inpatient care.
2. They can create a written safety plan that outlines steps to take when suicidal urges increase in intensity or frequency.
3. They can create a written crisis management and distraction plan that specifically outlines a variety of activities or behaviors that help them tolerate perceived stress or intense emotional arousal. For example, walking to a favorite location in the neighborhood, listening to a favorite song, reading a book of inspirational quotes, calling a friend, eating ice cream, dunking hands in ice cold water, etc. Any activities or actions that will help people become more present in the current moment versus being stuck in their own negative thinking patterns can be included on the plan as long as it is not harmful (e.g., drinking, drug use, other risky behaviors).
4. People with suicidal thoughts typically see little to no hope that things will change for the better in the future. This is an understandable mindset for soldiers fighting overseas, given the destruction and devastation they face on a daily basis. Finding hope for the future is an important tool in decreasing the intensity or frequency of suicidal ideation. Since hopelessness is one of the strongest factors associated with suicidal ideation, focusing on thoughts of hope and positive possibilities for the future can help a person reduce the focus on suicidal thoughts.

Suzanne Connolly, a licensed clinical social worker and licensed marriage and family therapist, specializes in trauma. She said in an email that sometimes stress can be so severe that suicide seems like the best option. In this case, more specific treatments are needed, not just talk therapy, which can reinforce negative feelings by talking about those experiences.

“I am trained in various techniques but I think two stand out above the rest,” Connolly said. “They both combine exposure to the problem, by thinking about the problem, and novel techniques. The first is [eye movement desensitization and reprocessing], which is now accepted by the American Psychological Association.”

“In my experience, EMDR really cuts down the amount of time, and thus the pain involved, as the person effectively feels peaceful even when thinking of the traumatic memories,” she added. “The memories are stored in the past and do not seem to be happening in the present.”

The EMDR International Association website has further information about the process of EMDR: http://emdria2.affiniscape.com/displaycommon.cfm?an=1&subarticlenbr=120.

Connolly also suggests thought field therapy (TFT), although it is not as widely accepted as a treatment method.

“There is a growing number articles published in peer reviewed journals (51 to date) which suggest that very short treatments of TFT can have results in eliminating symptoms of PTSD in most people,” she said. “My own experience in participating in three trauma relief deployments, by invitation, following Katrina, and five trauma deployment missions, by invitation, to Rwanda following the 1994 genocide, is that it can be extremely effective and efficient and the results most often permanent.”

Here is more information about TFT on her website: http://www.thoughtfieldtherapy.net/

Elaine Williams, a life coach and speaker, said in an email that there need to be more support groups and programs for people in the military who are re-entering society, as well as a shift in attitude toward mental health support.

“I think we need to have mandatory re-entry groups for 3-6 months,” Williams said. “I think we should be teaching emotional intelligence, relaxation/breath techniques, and EFT (emotional freedom techniques) for emotional release. They need more support when they come back, and they certainly deserve it.”

For more information about EFT, you can visit this website: http://www.selfgrowth.com/articles/eft-for-ptsd-effective-treatment-for-post-traumatic-stress-disorder