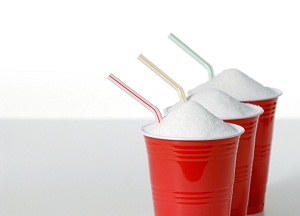 Is it slow brain functioning? Is it denial? Are we really beginning to talk about the “elephant in the room”? Do things have to get worse before we get real?

“It’s like watching a train wreck in slow motion,” says Laura Schmidt, PhD, a researcher at the University of California San Francisco. Research is piling up higher than ever with evidence that too much sugar destroys the liver, metabolism, brain function, and contributes to heart disease, diabetes, and cancer, in addition to causing obesity.

It was only a year ago that CBS’ 60 Minutes aired a segment about this very topic. Correspondent Dr. Sanjay Gupta asked researchers, “Is sugar toxic?” Dr. Robert Lustig, a pediatric endocrinologist at the University of California San Francisco, is a pioneer in what is becoming a war against sugar. Motivated by his own clients—too many sick and obese children—he has concluded that sugar, more than any other substance, is to blame.

Step 1: Admitting We Have a Problem
Eric Stice, PhD, a neuroscientist at the Oregon Research Institute, has used fMRI scans to conclude that sugar activates the same regions of the brain that are activated when a person consumes drugs such as cocaine. He also found that heavy users of sugar develop tolerance (needing more and more to feel the same effect), which is a symptom of substance dependence. Nora Volkow, MD, a psychiatrist at the National Institute on Drug Abuse, has done similar research using brain imaging techniques to show similarities between the brains of people who are obese and those of people who abuse drugs and alcohol.

Most people already know that too much sugar isn’t good for them, just as most people on heroin know that shooting up isn’t good for them, but you’ll see addicts go to great lengths to get their fix, justifying their habit until the consequences are painful enough to consider making a change. Let’s face it: We’ve been in denial.  The average American eats 130 pounds of sugar per year, which is approximately 17 cans of Coke per five days, a significant increase from our intake in the 1800s, when it was the equivalent of one can per five days. The truth is, America is high on sugar, and our lives are becoming unmanageable!

Denial of sugar addiction is enabled by excuses such as, “Everyone else is doing it”—from donuts at the office to candied yams at Thanksgiving. How could it be so wrong? There’s also the genetic excuse: “It runs in my family.” Many people want to attribute their diabetes, heart disease, brain fog, and whatever else is going on to genetics. The consequences of eating too much sugar are not as obvious as those of alcoholism or heroin addiction. Symptoms are often wrongly attributed to other sources.

The Dealers
Our national sugar addiction is a complex problem to address, as the culture-wide influence is far-reaching and widespread. The truth is, we are worse off than a person addicted to alcohol in a bar or a person addicted to heroin who is living with a dealer. Our “sugar dealers” are massive corporate conglomerates rather than the illegal drug dealer down the street. They get free reign in our society, with 80% of the food supply containing sugar. Advertisements function as repetitive, hypnotic suggestions beginning from a young age, normalizing and playing up the appeal of sugary products.

Remember the fight to get advertisements featuring Joe Camel banned because the cartoonish figure was particularly appealing to kids? What about Trix, Cocoa Puffs, Skittles, Twizzlers, sugary “juice drinks,” and an endless stream of products advertised during prime after-school and Saturday-morning kid time? Can you imagine advertising cocaine to children in the form of a candy bar?

The Link to Mental Illness
As I was doing research for this article, I came across an article titled “Dietary Sugar and Mental Illness: A Surprising Link” written by Dr. Stephen Ilardi, author of The Depression Cure and associate professor of psychology at the University of Kansas. My initial reaction when I saw the title: Really … a surprising link? Then I thought of our cultural history of ignoring psychological problems as though the head were, somehow, disconnected from the body. So this could be breaking news to many people.

The article goes on to describe the research of a British psychiatrist, Malcolm Peet, revealing a strong link between high sugar consumption and the risk of depression and schizophrenia. Sugar suppresses activity of a key growth hormone in the brain called BDNF which promotes the health and maintenance of neurons in the brain and plays a vital role in memory function. Hmm. What was I talking about?

I remember having a session with a mother and her 8-year-old son basically doing an intervention. The child was in therapy to address his anxiety, focus issues, and compulsive picking. He was taking medication to try to address these symptoms, with no real success. After discussing his eating habits, it became increasingly clear that the boy was hooked on sugar. And the more we talked about it, the more he sounded like someone who was addicted: “I don’t have a problem with sugar. I can quit; I just don’t want to.” His mother said she has attempted to cut back on his sugar, but gives in when he throws a tantrum (a clear withdrawal symptom, in my opinion). I’m sure the difficulty is made worse by the fact the mother has her own sugar addiction.

Food addiction is frequently connected to unresolved emotional patterns. More and more drug treatment centers are looking at dietary changes to help people maintain long-term health and sobriety. I work with clients in my practice and at Inspire Fit Resorts (Park City, Utah) to identify and resolve the thinking patterns connected with their eating and exercise habits. And what a tangled web we weave! Fortunately, we know how to untangle these thought patterns.

My Own Addiction
I got a handle on my own sugar addiction only a couple of years ago, and it certainly wasn’t easy. My addiction goes back to at least when I was 8 years old. I remember eating handfuls of Froot Loops straight from the box while watching Saturday-morning cartoons. I also remember climbing the countertop in the kitchen, when no one was looking, to get the Hershey chocolate milk powder and eat it out of the canister by the spoonful.

I got serious about eliminating sugar when I was looking at how I was outgrowing yet another pair of pants. I started counting calories, even the sugar ones, and became aware of just how much the sugary calories added up. So, instead of starving, I began to cut out more and more of the sugary foods and, after a while, I was mostly off sugar. The interesting thing is that when I ate a sugary dessert one day, it wasn’t long after that I began to feel quite congested and achy. It felt like I was having a moderate allergic reaction. This was eye-opening to me. I’ve been motivated ever since to keep excess sugar out of my diet as much as I can. My cravings, which used to have me running to the cupboard on a regular basis, have been greatly diminished.

The social pressure is interesting. At gatherings, I’m asked if I’m sure I want only one scoop of ice cream. “Are you sure?” Yes. And for my 7-year-old, I’m teased for “depriving” him of Twinkies, candy, and soda. That’s right. My parents did the best they could with what they knew, and I survived all right. With my understanding of addiction, I look at my good-natured, well-behaved son and I protect his brain with everything I’ve got!

What Can You Do?
Most people know sugar is a problem. The addiction is what keeps you eating it. I will address how to handle kids on sugar in my next article. For now, take care of yourself first and include your kids as you can. Here are a few suggestions to help you break the habit: