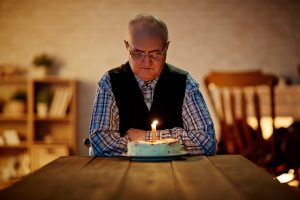 Seniors who report higher levels of loneliness may be more vulnerable to Alzheimer’s, according to a study published in the journal JAMA Psychiatry.

The study looked at the correlation between loneliness and a genetic risk factor for Alzheimer’s. Lonely people were more likely to show pre-clinical markers for Alzheimer’s. Researchers controlled for factors commonly associated with loneliness, including social networks, so the study suggests perceived feelings of loneliness—rather than solely isolation—may predict Alzheimer’s.

Amyloid-positive participants had higher loneliness rankings and were 7.5 times more likely to be classified as lonely compared to amyloid-negative participants. Those who carried the genetic risk factor for Alzheimer’s also reported higher loneliness levels. Researchers adjusted for common predictors of loneliness, including depression, age, sex, social network, and anxiety, so these factors alone cannot account for differences between the groups.

Previous Research on Loneliness and Alzheimer’s

This is not the first study to uncover a link between loneliness and dementia. A 2012 study published in the Journal of Neurology, Neurosurgery, and Psychiatry found a 64% increase in the risk of dementia among lonely people. Like the latest study, that study found the increase was due to perceived loneliness levels, not just to living alone or being socially isolated.

Previous studies have also linked loneliness to physical health problems. A 2015 study, for example, found loneliness may be as damaging to health as smoking 15 cigarettes a day. Having friendships and active social networks can help protect against developing diseases and help people recover more quickly if they do become ill.