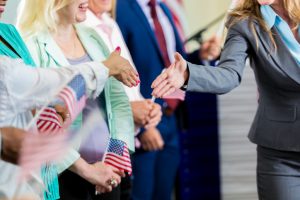 The study also looked at which voters were less likely to discriminate against LGBTQ+ candidates. People who were more liberal, affluent, and educated expressed greater support for these candidates. Support was also higher among women and people who expressed fewer religious views. Lead author Donald Haider-Markel suggests this means LGBTQ+ candidates should strategically choose to run for office in more liberal districts, though they could also be successful in some Republican-leaning districts with highly educated voters.

New Hope, Texas, Mayor Jess Herbst came out publicly as transgender in January 2017. Herbst is likely the first publicly transgender elected official in the state. She began her transition by taking hormone replacement therapy after her election, and she was the appointed replacement when the city’s mayor died in 2016.

Transgender individuals comprise about 0.6% of the adult population. Mental health difficulties and discrimination continue to be highly prevalent for trans people. A recent study found 30% of transgender teens and young people have attempted suicide, and about 42% have harmed themselves in some way. Half of trans youth have considered suicide with serious intent.