Study Explores How Students Are Likely to Respond to Racism 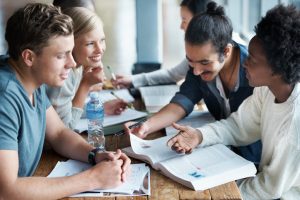 Factors such as age and ethnicity may affect how students say they will respond to a hypothetical scenario involving racism at school, according to a study published in the Journal of Community & Applied Social Psychology.

Previous research has also found white students may be less inclined to respond to abuse affecting students of color. For example, a study that presented white female college students with a hypothetical scenario involving a student at risk of rape found that students were less likely to intervene when the woman at risk was black.

The study involved a racially mixed group of 1,100 adolescents ages 12-15 in the United Kingdom. Participants reviewed a written scenario involving verbal racism at school, and then shared how they would respond to the situation. Responses fell into three categories: prosocial attempts to help; passively ignoring the racism; and aggression, such as getting into a physical altercation.

Students who had friends from different racial or ethnic groups were more likely to constructively intervene and less likely to remain passive or become aggressive. Minority students socialized to a strong ethnic identity were also more likely to intervene in a prosocial way.

Intervention programs for bullying, including race-based bullying, often focus on getting bystanders to stop ignoring bullying or to report it. The research suggesting race and age can affect bystander behavior could have implications for adults working to stop bullying and discrimination in school settings.