So Happy Together: The Joy of Being an Extrovert 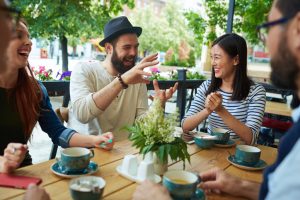 I am, for the most part, an introvert. Two of my three children are mega-extroverts. While they were growing up, I was often tired and prayed for solitude. A silly prayer, really, when you are an introverted parent living with one extroverted child, let alone two.

On workdays, I would arrive home and usually be met by two delightful children—yes, the non-extrovert was every bit as delightful—waiting to tell me all that had happened, the good as well as the bad, at school. On weekends, they were almost always up before me, hoping to spend time with me.

I tried many strategies to get them to release their interactive energy with each other. However, it rarely worked for very long. Most of the time, they insisted I be part of the gig.

They liked my reluctance about as much as I liked their insistence, which was not very much at all. I felt they talked too much, that they could and should talk less. They thought I didn’t spend the kind of time with them that I could and should, wanting me to interact with them more than I did.

Their process at times would fascinate me. They could carry on a conversation for what seemed like hours, frequently interrupting each other without any loss in train of thought or what the other was saying. One time, when they were engaged in a particularly long, uninterrupted exchange, I tried to figure out how they were managing to breathe. I did not succeed. They had to be taking in and releasing air somehow!

About the time they were entering their teen years, I was sharing office space with a couple of vocational counselors who used the Myers-Briggs Type Indicator (MBTI), a personality type questionnaire built on four natural and normal dimensions of personality. Out of curiosity, I completed the questionnaire. The characteristics and traits associated with individuals with my type profile (INFP) were surprisingly accurate.

One of the four dimensions the MBTI is built on is extroversion-introversion; natural differences in how individuals are energized by life experiences. As I read through the characteristics and traits associated with the extroverted process, I realized that my extroverted children:

In other words, my extroverted children naturally and normally engage in life experiences in a manner that is quite the opposite from my own—a difference that is not a matter of choice but rather a product of nature.

Once I understood the meaning of these differences, I shared the information with my kids. I had always felt bad about my reluctance to engage, like I was being a bad parent. My children told me they had always felt bad about bothering me so often, as well as hurt and rejected by my frequent preference for solitary pursuits. Mutual understanding has brought us much closer as the years go by.

The simple fact of the matter is this: Interacting with others energizes extroverts. They enjoy it. When free time opens up, they tend to want to fill it with interactive engagements. As a general rule, the stronger their extroverted orientation is, the more pervasively present this drive for engagement is likely to be.

Because they are more assertive by nature and thrive on engagement with others, extroverts often network with greater ease and may be more likely to be noticed in the workplace. But that doesn’t necessarily make them better employees than introverts, whose thoughtful and reflective nature can make them adept analytic thinkers.

Because they are more assertive by nature and thrive on engagement with others, extroverts often network with greater ease and may be more likely to be noticed in the workplace. But that doesn’t necessarily make them better employees than introverts, whose thoughtful and reflective nature can make them adept analytic thinkers. Extroverts and introverts each bring strengths to the table that are equally valuable, if not equally valued, at all levels in the workplace hierarchy.

In many circles, the natural qualities of extroverts tend to be viewed more favorably, as words such as “outgoing,” “friendly,” and “happy” are often associated with their behavior—which, while possibly true, disregards the reality that what is happening on the outside does not necessarily reflect what’s going on inside. Meanwhile, less fetching descriptors such as “reserved,” “guarded,” and “private” tend to be more often used in association with introverts, whose warmth may be less visible but no less real.

Nonetheless, an extrovert’s nature provides some advantage in social situations and group environments, if only for their ability to function at an optimum level amid high interpersonal stimulation. They may also be viewed as more confident (maybe they are, maybe not), more easily attract friends (though not necessarily more quality friendships), and be assumed to have built-in leadership skills because of their penchant for communication (there is more to effective leadership than that, of course).

On the other hand, depending on the context, extroverted behavior may also be viewed as annoying, self-unaware, impulsive, or ill-considered. Indeed, whether you consider it advantageous to be an extrovert or introvert may depend in part on which end of the spectrum you occupy.

As with introverts, extroverts’ natural inclinations have value in almost any context. The chief difference between introverts and extroverts is in how they draw their energy. For extroverts, life force comes from external sources. Being around others is life-giving for them, as opposed to draining.

Whether introverts or extroverts have it better (and in what contexts) is open to debate, but what is certain is that greater understanding about these two personality dimensions can go a long way toward bringing everyone closer together. I should know.

Editor’s note: This article was supplemented with material written by GoodTherapy.org editors. For a look at extroversion’s counterpart, introversion, please see Michael L. Jackson’s article Happy in Solitude: The Joy of Being an Introvert.