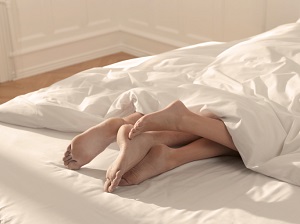 I frequently share with clients one of my favorite Buddhist slogans: the spiritual advice to “let go of attachment to outcome.” When people begin their work with me with goals such as, “I want to learn how to achieve simultaneous orgasm with my partner every time we have sex,” I suggest they release their attachment to the outcome of orgasm … release their frantic need to climax in perfect synchronicity each and every time. This said, orgasm is pretty darn wonderful—especially when we can relax and “let it be,” as The Beatles sang.

Leonore Tiefer writes about orgasm in her wonderful and sometimes hilarious book Sex is Not a Natural Act. Her alter-ego sexpert, Dr. Frieda Tingle, reports that “orgasm is very important for many Americans because it tells them when the sexual encounter is over. Most of these people enjoy competitive sports, where some official is forever blowing a whistle or waving a little flag to let them know the event has ended. Without orgasm, they would be fumbling around, never knowing when it was time to suggest a game of Scrabble or a corned-beef sandwich.”

I’ve often wondered why so many folks are convinced that simultaneous orgasm is the ultimate pleasure. Perhaps this desire is due to the fact it’s extremely difficult to pull this off. It’s not necessary or even preferable for sexual partners to climax at the same time, anyway. It can feel glorious to witness your loved one climaxing, which is darned near impossible if you’re blasting off simultaneously!

The French philosopher Jean-Paul Sartre reported that when he reached orgasm he entered his own private universe, completely losing awareness of his partner. Ouch! Most people find that the feelings that follow orgasm initiate a special kind of intimacy when shared with someone they care about.

I like to suggest that people celebrate the “good enough orgasm”—especially when sex is with the same partner—because orgasms with your one and only sweetheart can run the gamut from totally spectacular to wimpy/disappointing. This is why it really helps to let go expectations and attachment to outcome/orgasm.

Fortunately, a partner is not required for us to experience orgasm—over my many years talking to people about sex, I’ve learned that the vast majority of us experience our first orgasm alone. Some can climax with their legs squeezed together, while others need to have their legs spread wide; Paul Joannides refers to these as “innies and outies”!

The popular recent film “The Sessions” depicts the true story of a middle-aged man (played by John Hawkes) who contracted polio as a very young boy, presumably before he ever masturbated. He hires a surrogate partner (Helen Hunt) who teaches him how to reach orgasm. While most of us require genital stimulation in order to orgasm, the reality of hands-free orgasms such as this convinces me that the ability to experience orgasm is “extrasensory” beyond just the groin.

Joannides says it well: “People who have lost one of their senses do not suddenly grow new ones to compensate. Rather, they are forced to better use the senses that remain. This suggests that many of us could achieve greater sexual pleasure from other parts of our bodies if we learned to allow it.”