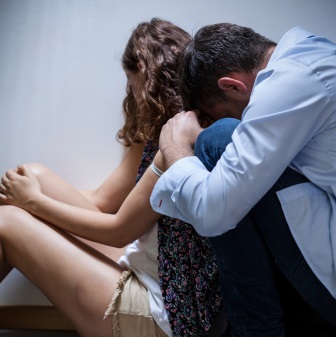 Partner abuse, or intimate partner violence (IPV), is most simply defined as coercive control directed toward an intimate partner. Abuse is behavior that physically harms, incites fear, or prevents the partner from doing what he or she wishes. IPV may be chronic, sporadic, or an isolated incident.

Intimate partner violence has been around as long as there have been couples in relationship. For a long time, IPV was regarded as a man’s prerogative and swept under the rug. British common law, for example, condoned wife beating and instituted what came to be known as “the rule of thumb,” illustrating that a man could beat his wife with “a rod no thicker than his thumb.” It wasn’t until the late 19th century that lawmakers in the United States began to rescind a man’s legal right to beat his wife. For the next century, laws to protect women from partner violence were on the books—but they were not consistently enforced and IPV continued to be accepted or dismissed.

The 1970s ushered in a new era for women’s rights, and violence against women began to be recognized as a sociopolitical issue. A movement emerged, demanding that the legal system recognize the right of women to be safe in their own homes. Many of the leaders in this movement were formerly battered women who had escaped violent partners and now worked doggedly to reform the legal system to treat domestic violence as a serious crime. The cry went up to “hold batterers accountable.” The movement’s message was simple and straightforward: abusive men exercise power and control over their female partners and they must be made to stop. A new school of thought emerged recognizing that many men benefit from power and status at all levels of society and, similarly, that many men believe that they have the right to control their female partners.

Today there is a body of research that tells us that not all IPV is the same. In the article Why Do Partners Abuse Each Other?, I discussed the range and types of IPV, but it cannot be emphasized enough that all IPV is harmful and needs to be recognized for what it is, so that it can be stopped. Unfortunately, there just are not enough sources of information about IPV available to professionals or laypeople. In my work with clients who grew up with IPV or are living with it now, the question often comes up, “Why couldn’t I have learned this earlier? Why can’t they teach this in school?”

Indeed, though my graduate-level training in counseling psychology was strongly geared toward family therapy, there was barely a mention of partner violence. This is particularly disconcerting given the prevalence of at least one type of IPV, situational couple violence, estimated to occur in more than 50% of couples! Situational couple violence doesn’t typically represent an ongoing pattern of abuse, but is specific to a particular conflict. In addition, teen dating violence made headlines in recent years, after a preventable tragedy occurred. But how widely is information on this issue disseminated to teens in middle and high schools? Most communities have programs for teaching primary and secondary school students about child abuse, but what about abuse between parents? What resources do they have to understand why one parent regularly beats and humiliates the other?

I hope that through the advocacy of educators and mental health providers, we as a society will gain a better understanding of what is going on behind closed doors all across the country. Professionals in all types of social and health services need to know what questions to ask and what warning signs to look for. The safety and welfare of the women, children, and men that they serve may depend on it.

If you suspect that you, your teen, a friend, or a family member might be in an abusive or controlling relationship, consider how that person might answer the following questions.

A pattern of one or more of these behaviors is indicative of an abusive relationship. Many of these examples represent an abusive partner’s efforts to destroy the self-confidence and self-esteem of his or her partner.

If you or a loved one is in an abusive relationship, that person urgently needs understanding and support. Try to assist that person in getting help as soon as possible. Don’t wait, thinking things will get better—they won’t.