Sex 101: A Little Pillow Talk Can Go a Long Way 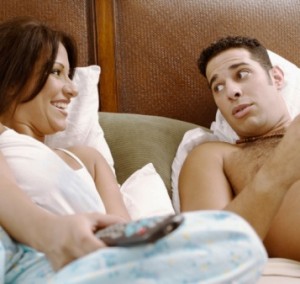 A long time ago, far, far away, I lived in the country and raised llamas. There is little photo documentation remaining of this time in my life, save one snapshot of me helping Apache, our male llama, guide his penis into one of our females. This is called, in agricultural parlance, “settling.”

People have asked why he needed this assistance, since dogs, cats, and other farm animals don’t seem to need help. The answer, I explain, is that Apache grew up with no opportunity to observe other llamas having sex. So he required my “helping hand”!

Like poor Apache, humans grow up with no opportunity to watch our neighbors get it on. We’re the only critters who (usually) have our sex indoors and in private. Our brains are huge; our minds have a lot of room for pondering sex. But when it comes to verbalizing those thoughts and feelings, our big brains are useless—we just don’t know how it’s done.

So this post explores talking to your sweetheart about sex. Getting naked emotionally and verbally is far more important than whipping off all your clothes.

Julia Hutton, author of Good Sex: Real Stories from Real People (Cleis Press, 1992), interviewed dozens of couples to learn how each person defined “good sex.” She writes: “These interviews suggest that sexual savvy depends less upon how-tos than on self-knowledge, which evolves slowly, awkwardly, and through many different routes.”

What we assume should be a mystical, mind-blowing experience can be so much better when we talk about it!

Many of us harbor a significant amount of guilt and shame about what turns us on—our “arousal template.” Many of us would have much more fun in bed if we simply talked with our partner about what feels good and what doesn’t. I remember “advice” that I read years ago as a teenager in one of the teen magazines. Something about French kissing: “Let the boy (heterosexist assumption here!) explore your mouth with his tongue. He’ll know what to do!”

And where, I ask in 2014, would teenage boys in the 1960s have learned about French kissing? In locker rooms? Watching movies? A colleague recently suggested that, these days, teenage boys learn about sex from looking at whatever comes up after hitting the “FREE TOUR!” buttons on X-rated websites.

Imagine two people about to have intercourse for the first time. “Uh, shall I …?” “OK.” Intercourse commences, and there’s the final verbal exchange. “That was great.” “Yeah.” Cavemen were probably more expressive. Most of us aren’t ashamed to have sex, but we hit walls when it comes to talking about it.

For those of us who are partnered or married, it can help to find a comfortable name or term for your genitals. Sex therapist Paul Joannides had us all roaring with laughter at a conference years ago about this subject. When he encouraged an angry couple to try this, the wife dubbed her vagina “Jewel Box.” “Considering the state of their relationship,” Paul quipped, “she should have named it Jaws.” (I don’t remember what her husband named his penis.)

So why are guys or gals—of any age—supposed to know what to do? Why aren’t we encouraged to explore and learn together, teaching each other what feels good?

I know couples who spend a lot of time reading and poring over material about wine, gardening, travel, and home decorating. They value, appreciate, and discuss these topics with their beloved. Not so often with sex. Many couples talk less and less about sex once they’re mating in domesticity. Sexual desires go underground, and we feel embarrassed to talk about kinky stuff.

If your sex life is dandy right now, hopefully your good fortune will hold. I often see or hear from couples who had roaring sex lives years before. Intimacy fades when we take it for granted, and the healing process isn’t always easy. So talk, talk, talk. Even if you’re too tired to do anything, talk. Talk about what you will do, what you might do, or …