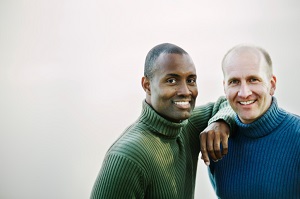 Keeping your needs and feelings secret can be disastrous in any relationship, but for those who find themselves in a serodiscordant relationship, it can lead to hurt feelings, misunderstandings, anxiety, and potentially risky behavior that could put both partners in serious jeopardy.

A serodiscordant relationship is one in which one partner is HIV-positive and the other is HIV-negative. Other terms that are used to describe this type of relationship include mixed status, sero-divergent, and magnetic, to share a few.

For many couples in serodiscordant relationships, the challenges they face are similar to those experienced by anyone trying to make a relationship successful, but those challenges can take on even bigger energy with the presence of a positive HIV status.

Because of the presence of HIV, many mixed-status couples face added stress and anxiety over concerns of transmission, providing care if the HIV-positive partner becomes ill, and finding support for the emotional management of the disease. Even discussions about sex, which can be challenging in any relationship, bring up deeper fears when compounded by worries about transmission of HIV.

It is important to talk about these fears and anxieties in a safe and supportive environment where both partners can be open about their feelings. Both partners developing an attitude of willingness and a deep desire to communicate, both speaking and listening, can develop this safe environment. Talking about this openly can be a risky experience, and yet it is the most powerful means to keep a relationship healthy.

Topics that might be important to discuss may include sharing about each partner’s emotional well-being, sharing information about medical issues as they arise, discussing the stress of caregiving, and the issue of disclosure—who among friends and family gets to know about the HIV-positive status.

It is also vitally important to talk about sex. It is common in serodiscordant couples for each partner to harbor fears about the transmission of HIV during sexual contact. The HIV-positive partner often carries concerns over potentially infecting his or her partner, while the HIV-negative partner worries about becoming infected. These worries can create a barrier to true intimacy and leave each partner feeling unfulfilled. This is a time when each partner must risk talking about his or her needs, what forms of sexual contact feel safest, likes and dislikes, and how the couple can find ways to keep their sex life active and intriguing.

When these deeper levels of communication are developed, both partners feel that their needs are being met and a stronger commitment to the future of the relationship is created. There are many serodiscordant relationships that are thriving thanks to an ongoing commitment to open, honest communication based on attraction, respect, honesty, and love.