Can Sleeping Apart Keep Couples Together? 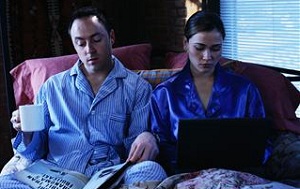 Television shows from the 1950s and ‘60s rarely showed married couples in the same bedroom. When they did, they were usually in separate beds. Today, it is assumed that most spouses share not only a bedroom, but also a bed. However, in a recent article, Iris Krasnow, a journalist and author, gives compelling reasons why having separate bedrooms may be just the thing to keep the romance alive in any marriage. Krasnow interviewed people for her recent book on marital success and found that over and over again, both husbands and wives agreed that spending some time apart from a spouse increases the romance.

The idea of taking a guys-only golf vacation or a girls-only weekend may be nothing new to most couples. However, designing a home with two separate master suites to ensure privacy is a new concept but one that was predicted by a 2007 survey conducted by the National Home Builder’s Association. The reasons that this appeals to people are many. Couples with conflicting work schedules may prefer to have separate sleeping quarters. Snoring and other disturbing sleep habits could also be the motivation for sleeping apart. But the most popular reason seems to be the allure of preserving privacy and adding mystery.

Couples who share bathrooms and bedrooms also share exposure to annoying hygiene rituals, unflattering bathroom activities, and full nudity. Some of the couples interviewed by Krasnow stated that keeping the shyness and discretion in the relationship added an air of sexiness and mystery. When there is nothing left to the imagination, intimacy can become routine rather than romantic and erotic. Krasnow also notes that having personal space and privacy is essential for each partner. When one spouse feels like they are exposed at all times, the element of surprise is harder to achieve. One spouse reported that although she did not have her own bedroom, she chose to dress behind a screen that covered her entire body. This allowed her to maintain her physical privacy and also gave her the opportunity to emerge in something that would satisfy her self-esteem and her husband’s sexual appetite. For some of these couples, being apart keeps them closer. Krasnow adds, “It is very healthy for a relationship to be able to retreat into a satisfying feeling of seclusion by simply going into one’s personal bedroom and closing the door.”