Saying, ‘I Am Excited!’ May Ease Performance Anxiety 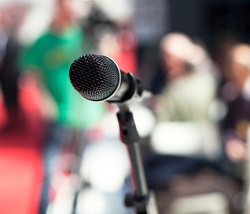 For anyone who has ever had to speak before a crowd, take a test, or perform in public, the experience of shaky, sweaty, heart-palpitating performance anxiety may be a familiar one. People often attempt to calm their nerves in a variety of ways: deep breathing, meditation, and medication, to name a few.

However, a recent study suggests that the best method of coping with the anxiety that sets in prior to a performance or a test is to get excited. In other words, embrace the anxious energy by telling yourself it is, in fact, excitement, thereby transforming it into a positive, energizing experience as opposed to a draining and debilitating one.

Easier said than done, perhaps. But Brooks may be onto something. Regarding the study, which was published in the Journal of Experimental Psychology, she pointed out that both anxiety and excitement are characterized by high levels of emotional arousal, whereas being calm is a state of low arousal. Because of their energetic similarity, a simple shift in perspective may be all that is needed to convert anxious feelings to excited ones.

This requires actual effort on the part of the person trying to transition from paralyzing fear to exhilarating excitement, but according to Brooks’ research, the work mainly involves that person telling his or her brain, ideally out loud, that whatever it is he or she is facing is good and exciting rather than terrifying and threatening. Yes, that’s right: Just say it.

The experiments conducted by Brooks involved hundreds of college students and community members reciting statements about being excited when confronted with situations that trigger anxiety—specifically, a persuasive public speech, a set of difficult math problems, and a video game karaoke performance.

For the men and women who participated in the public speech study, the instructions were to prepare a presentation on what makes them “good work partners.” They were also told that the speech would be videotaped and judged by a committee. Prior to giving their speeches, some were told to say, “I am excited,” while others were instructed to say, “I am calm.”

Similarly, when given the set of challenging math problems, the group told to “get excited” scored an average of 8% higher and reported feeling more confident than those who were told to “remain calm.”

Before singing, the men and women who took part in the karaoke study were told to tell themselves they were feeling one of five ways: anxious, excited, calm, angry, or sad. Once again, those who told themselves they were excited scored significantly higher on pitch, rhythm, and volume (80%) than their calm, anxious, angry, and sad counterparts (53%).

“It really does pay to be positive,” said Brooks. So again, even if a person does not actually believe he or she is excited initially, the simple act of saying it—several times, if necessary—heightens genuine feelings of excitement.