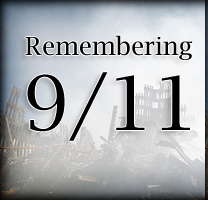 I was sitting in my New York City office on 84th Street when the phone began ringing over and over. Clearly someone was trying to get in touch with me, but I generally don’t answer the phone during sessions, and we only had about 15 minutes to go anyway.

When the session was over I answered the phone – it was my friend, Judith, asking me if I knew what was happening. She had heard a lot of police sirens. My office is set in the back of a building and doesn’t get much street noise.

Judith and I agreed to meet on the corner of 79th Street and 3rd Avenue and check things out.  We could not understand the strange scene unfolding before us.  Buses were pulling over and parking; we walked further west and saw that Central Park was closed. People were shouting. I couldn’t understand at first what they were saying, but when I heard something about a fire in the World Trade Center, I looked down the avenue and I saw a giant plume of smoke.

I called my husband, my kids, but couldn’t get through because the lines were busy. Then all phone lines were down. I used the internet to reach a friend living in Ohio, who was able to get in touch with others in our family and keep everyone connected. Luckily, I was able to reach my daughter-in-law who worked downtown; I was very worried about her because Debbie was 5 months pregnant. She told me she was on a bus headed to my apartment, and I planned to find her, if I could.

We met uptown and she spent the night with us; there was no way Debbie could get home to her husband in New Jersey. We drove her to Teaneck the next day. The highway was empty; except for police cars, we were the only car on the George Washington Bridge. We were all scared.

The skies were shiny blue and yet suffused with the oily stench of burning bodies.

My husband and I went downtown together. Buildings, streets, and every flat surface was lined with several inches of dust- dust made out of the people who had been immolated.

How do you stay sane in this mad chaos?

I wanted to help. I was electrified. I galvanized the psychoanalytic institute, NPAP, my Alma Mater, into opening its doors to give shelter and comfort to those in need. A few hundred students and graduates spread out through the city to help people at their homes, their jobs, and anywhere else they wanted us to go.

I can’t tell you how much I love New York. I was born and grew up here. I’ve lived other places, but I belong here in this city and I can’t imagine living someplace else. I MUST vote for the mayor of New York, say “how ya doin’?” to my neighbors, and go to my local yoga institute, (New York Yoga, of course). I could never leave.

I am lucky. Although I knew people who were killed or sickened, no one in my immediate family was hurt, although my good neighbor of over 30 years was in BOTH World Trade Center disasters- and had to evacuate twice. A client I was very fond of died. I knew others who had barely survived.

The tragedy in the World Trade Center woke me and many others to our power and ability to lead people when necessary, to write and speak from our hearts. Anything else is a waste of time.

How can we remember and memorialize? We must never forget that we are all connected and so must help one another wherever and whenever we can.