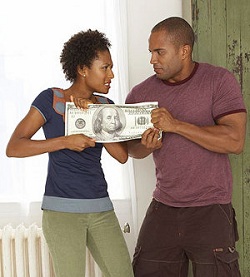 Modern marriage as an institution is no longer primarily a financial arrangement agreed upon by parents, as has been the case historically in nearly all cultures. And yet money and financial issues are the third most common issue cited by couples seeking divorce, following loss of intimacy/ irreconcilable differences and infidelity. A 2006 Money Magazine poll found that 84% of couples see money as a source of tension in their marriage and 15% admit to arguing about it several times a month. Usually the arguments are about different financial priorities and debt.

Couples often fail to discuss their financial attitudes, hopes and worries prior to marriage; yet, they often have strong feelings associated with money that catch them by surprise down the road. As in many other areas, some couples use their good negotiating and communication skills to accommodate each other’s financial needs and dreams; others quickly discover that money worries lead to major blow-ups. One couple I knew had a stormy fight every payday when the husband would go out and treat his buddies to a drink and then come home to an enraged wife who presented him with a stack of unpaid bills.

If you and your partner are frequently arguing over money, consider this opportunity to step back and shift from an accusatory to an investigative stance. First, work to develop a healthy curiosity about your own particular preferences and assumptions about money. Instead of blaming your husband for irresponsible spending or your partner of 10 years for excessive frugality, explore the meaning and the history of your ties to money. Rather than shutting down every time your wife wants to discuss the budget, explore with her what her objectives are and become aware of your own anxiety around this topic.

In our society, having self-discipline about money is as much a challenge for individuals as it is for couples. If you had financial woes prior to the wedding, odds are you will carry them into your marriage. Before accusing your spouse of reckless spending or poor budgeting, start by examining your own behaviors. Many of the questions below that are intended to guide your conversations with your partner can also be used for your own self-study. Many couples find that a sudden change of fortune, for the better or the worse, profoundly changes aspects of their relationship; for some, it threatens their very foundation.

Money Types
We all carry images of money archetypes from the extravagant tycoon to the anxious miser to the spendthrift heir.  Psychologists have begun to identify broad categories into which people fall in terms of their relationship to money.  Brad Klontz, Psy.D. and his colleagues recently developed an interview that splits people into four broad groupings: money avoidant, money anxious, money preoccupied, and money vigilant.

Money Avoidant
“Raymond still acts as though we’re a couple of 20 year old kids with not a care in the world,” complains his wife Joanne. “The cost of something is always an afterthought to him.  Or some minor inconvenience.  One day he went out and bought a roadster with all the money we had put away for a down payment on a house!  In our 30s we racked up an incredible amount of debt. I was busy raising the kids and was assuming he was handling all the finances.”  It turns out nobody was and the Coopers were evicted from their apartment. Since that time Joanne has taken over their money management, cancelled all of their credit cards, and limited Raymond’s access to funds.

Like many money-avoidant types, Raymond rarely talks about money. When asked, people in this category have a number of negative ideas they attach to money. They see money as a corrupting, view wealth as a product of greed, and/or see themselves as undeserving of financial success. As a result, money-avoidant types are often more generous with their resources yet make terrible financial planners.

Money Worshippers
The vast majority of Americans fall into this category of money beliefs. The basic premise is that money will solve all problems. Even though studies have shown that a household income above $75,000 brings no additional increase in happiness, the American Dream lives on. Money worshippers are preoccupied with schemes for making and keeping money, believing that money gives life meaning and purpose.

Adrian and Jerry were a perfectly matched couple in this regard. Adrian had plotted out a financial plan when she was a college sophomore with the intent of earning her first million before turning 30. Jerry shared this dream and the two of them bonded around their frequent conversations about how to invest and spend their acquired wealth. Had Adrian married Raymond, this topic would most likely have been a constant source of friction.

Money Status
The movie, “Meet the Joneses,” does a terrific job of remaking this style into a laughable extreme. Mr. and Mrs. Jones and their two nearly perfect teenage children are constantly flashing their financial success. If they could wear neon lights saying “Envy me, I’m rich,” they probably would. Every material item they use or wear conveys a core set of beliefs that include the following: only the best will do, good people have money, poor people don’t deserve money, your self-worth is based on your net worth. In “Meeting the Joneses,” we eventually learn how tapping into a community’s status consciousness is the marketing ploy used by a consumer product firm who sends actors – in the guise of the perfect family – into bedroom communities in order to increase sales.

Martha and Graham Fenster, while not quite the Joneses, struggle as a couple in maintaining this image. They each drive imported cars, eat at the finest restaurants and wear designer clothes. Over their ten year marriage they have racked up $100,000 in debt. Their friends and acquaintances would be shocked to learn that this couple lives in a small, one bedroom apartment in an undesirable section of their city (they keep a post office box so as to avoid giving out their residential address.) While Martha and Graham share the same attitude to money, the stress and shame they experience about their finances feels so overwhelming to them both that they rarely talk about their debt and instead reinforce each other’s belief that the next purchase will make them feel better.

Money Vigilance
“Did you deposit the check?” “How much is the new boiler going to run us?” “How could you rack up a $1,200 credit card bill?”  These questions are raised in many homes on a regular basis. They are natural “business” questions that reflect a need to manage the family’s resources. But they may also be the tip of the iceberg under which financial anxiety and uncertainty occupy a huge part of a person’s emotions and thoughts. People who are financially vigilant believe in preparing for a rainy day (or every possible emergency!), often prefer saving over spending money, and, in some instances, view money as somehow shameful. They think about it a lot yet may be reluctant to discuss it.

So, the next time you get into a financial squabble with your partner, rather than reacting or retreating, take the time to ask yourself and each other, what are the big picture feelings and values at the root of your anger or distress.  Investing in more awareness and understanding is the first step toward having a more productive money talk.