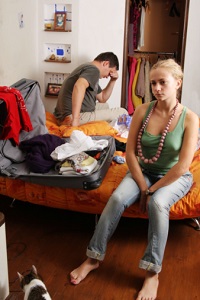 You’ve just caught your spouse listing his name on internet sites for meeting sexual partners. What now? You let him know you are furious in no uncertain terms.

Fast forward one month later. What used to be a lovely marriage has turned into a nightmare. Nothing your husband does seems right, and you let him now this in no uncertain terms. At first your husband seemed remorseful about his internet searches. Now he tells you that he only does these searches because you are difficult to live with. Your relationship has gone from bad to worse, and both of you have begun to discuss divorce.

The three biggest contributors to divorce are the three A’s: affairs, anger, and addictions. As a couple, you and your husband now show all three—his inappropriate contacts with other women are a form of affairs, with or without physical intercourse. They may also be addictive, or at least compulsive, behaviors. By dealing with your husband’s problem in anger, you raise the count to three.

One possible remedy is to call a truce. Tell your husband that while you have been distressed, you would like to apologize for dealing with the dilemmas the two of you face with anger. Offer instead to approach the challenges as partners.

If your husband sees his sexual connection with other women as acceptable behavior, you may be best off saying “I love you, but I’m leaving our marriage. Multiple sexual connections makes our marriage contract null and void. Let’s talk about how you can still be a great dad to our child, and how we can build a positive co-parenting relationship.”

Go together to a bookstore. Many books there should offer the two of you insights about compulsive multi-partner sexual behavior. Books by Frank Pittman, Shirley Glass, Peggy Vaughn, and Dave Carder are among my favorites on the subject of infidelities.

Schedule a series of quiet talks to discuss what you have learned from the books. Discuss your families of origins’ experiences with infidelity. What happened in your family that may have pointed you in the direction of marrying a man with wandering tendencies? What happened in his family that suggested to him that meeting many women is what men do?

Try also the following two questions, which should prove useful for exploring both his affairs.

1) “If you were to look at what you’ve been doing in the best possible light, what have you intended to accomplish?”

2) “What might be a better way to accomplish the same goal without the costs of affairs and anger?”

Then, or simultaneously, take the same quiet-talking-plus-bibliotherapy approach to understanding the role anger can play in undermining a marriage. See the games that teach about anger at www.poweroftwo.org. Talk over what you experienced with regard to anger in each of your families of origin. And discuss the two questions above.

Finding a therapist who can serve as your guide in these discussions could be helpful. Even without a therapist to aid you, if you each stay calm and introspective, with both of you refraining from talking about or criticizing your partner, and both of you seeking to understand your own input into the problems instead of succumbing to the temptation to blame the other, you may be amazed.

The internet listings started out as a curse between you. With quiet talking, open information flow, and a spirit of mutual self-discovery, the curse has potential to bring the blessings of understanding, growth, and love to your home. Even difficult conflicts, such as those about the biggest problems in a marriage, the three A’s, can be resolved with cooperative talking, exploration, and problem-solving. A conflict resolved is a relationship transformed.