Put Them on the Chief’s Desk 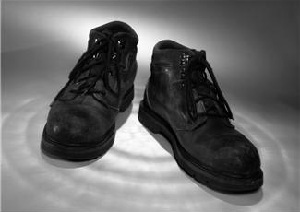 “Martin Luther King said, ‘The true mark of growth isn’t how a man acts when or during times of comfort and happiness, rather how he acts during times of trials and controversy.’ I put that to the test last week. On my way to chow the Asst. Chief of Security pulled me aside and searched me. My shoes had a hole in the heel from daily wear. He accused me of using it as a hiding spot for contraband. He told me to go to my room and don’t leave it until he came to pick them up. I didn’t protest or complain. I didn’t say a word the whole time. I came to my room. I sat in there until the next day. I missed breakfast, supper and my shower. When the Sgt. came to pick them up I didn’t say nothing. I just handed them to her. When she asked what I wanted done with them, I said, ‘Put them on the Chief’s desk cause he wants them so bad.’ That was it. That was the best behavior I ever displayed in a situation such as this. Last year I would have been writing this letter from segregation….My resolve is to pray for them everyday and show them compassion even when they are adverse to me, and want to power thrust on me. I am not the same person I was.”

This man’s triumph is his choice to not protest or complain—not to “make a poor choice from the thrall of anger,” as he puts it. Even in the experience of significant abuse of power by the person in the up-power position, if the event happened as described, this inmate made a conscious choice to stay calm. As a result, his self-esteem increased. He had an opportunity to feel proud of himself.

Prison is one of the environments in which the impact of the power differential is most extreme. The guards and other officials in up-power positions have immense control over the inmates’ lives—both daily and long-term. Because the experience of prison is supposed to be about punishment as well as rehabilitation and the potential for violence is so high, the methods used for control can be cruel. This inmate’s actions aren’t likely to change the prison system, but they certainly are changing him. And maybe they had an effect on the chief that he may never know. Sometimes this is the best that can be done in an abusive situation: Use your power to choose your responses and to cultivate your self-esteem. As Victor Frankl said, “When all else is taken away, there remains what he called ‘man’s last freedom,’ which is the freedom to choose how we will respond.”

Recently, another inmate has come to my attention through his extraordinary book: Stepping Up: Wholeness Ethics for Prisoners and Those Who Care About Them, by Troy K. Chapman. He has used his 20-plus years (and counting) in prison to become educated and learn about himself, relationships, and the sacred. He describes the state he was in before being sentenced to prison in his early twenties. “What was I searching for when I was chasing money, sex, drugs, pleasure, and so on? I think, behind all other things, what I wanted more than anything else was just to be whole.” He has now spent a lot of time exploring what “wholeness” is. His definition: “Wholeness is soundness, well-being, and ongoing realization.” His book talks more about these three aspects, especially in terms of how inmates can learn and practice them while in prison, both to make their time in prison more worthy and to prepare them for life after prison. He quotes Bruce Barton: “Nothing splendid has ever been achieved except by those who dared believe that something inside them was superior to circumstance.” His recommendation for wholeness ethics as it could be applied by prison management officials is that the main organizing question in regard to each inmate should be: “What does this person need to be whole?” Contrast this question with the more usual and unspoken one: “What does this person need to feel bad enough about himself and what he did and punished enough to make up for it?”

One system, and I’m sure there are many others, that works with Troy’s question and with the goal of being in right relationship with power is restorative justice. In a restorative justice process, the victim and the offender choose to meet with each other in person. The victim tells the offender exactly how the offense impacted him or her. They then talk about what a reasonable repair would be. This process contributes to the soundness, well-being, and ongoing realization for both victim and offender: Right use of power in the pursuit of wholeness for all.

Now, what is it that has been supportive of the evolution toward more wholeness on the part of these two incarcerated men? Both have had loving and supportive contact with people outside prison. My long-time friend Anna Cox, a Buddhist, teaches Buddhism and Buddhist principles to prisoners. Out of her prison work she has created a program called Compassion Works for All, which sends out a monthly newsletter, “Dharma Friends,” to 3,700 prisoners in 800 prisons in the United States. CWFP works to help those in prison who often feel lost and abandoned. And, of course, both the men described here have done a great deal of inner work on their own. They were given some needed support, but they did the challenging inner work required. For those interested, Troy can be contacted by searching on the internet for “Troy Chapman, Stepping Up.”

I will conclude this article by sharing an example of an individual’s inner work to refine his personal power. These words come from the personal story of the anonymous inmate in the anonymous prison who gave us the story of his shoes. Here’s how he describes his process of being able to be less reactive and angry.

“I refuse to [let] anyone get to me so bad that I have to step off my square and jeopardize my program because of a poor choice I might choose in the thrall of anger. I have fallen victim to it countless times. The first thing I must realize is nobody can make me angry but myself….The reason we get angry is ‘cause we see or perceive something that is in them, is also in us as well….If we take the time to correct our own negative behavior, we would not get angry as much. The normal person take them few precious moments to assess and evaluate the consequences of the choices he or she may have. That’s why we are in prison, ‘cause we did not take the time to think of our consequences….I committed my murder in 1986 and I can tell you what I was thinking even after all this time. I was thinking, ‘I will teach this person a lesson of stealing from me. I am going to set an example for anyone who thinks of stealing from me.’ I wasn’t thinking normal. So we must have a clear mind and a rational thought process before committing actions.”

Power-differential situations where there are abuses of power can be changed by a combination of ongoing inner work and self-empowerment by those in the down-power role coupled with the bringing of heart and wisdom to the use of power of those in the up-power role.