Depression Medications: How Can You Get Your Libido Back? 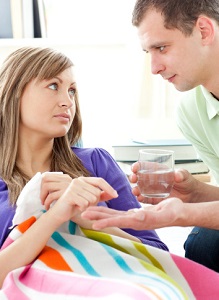 I often see people who are in despair because they no longer have much interest in sex—what a current client calls her “disappearing libido.” Is she depressed about this? You bet! Did she become more depressed when her medical doctor put her on an antidepressant to alleviate the depressive symptoms? Quite possibly.

It’s common knowledge that sexual intimacy often takes a big hit when people begin taking antidepressants. So wouldn’t you think that doctors would talk to people about side effects before they prescribed? They rarely do. One doctor that I know explained, “With an allotted 15 minutes max, do you think I’m gonna ask this patient about her sex life? No.”

I guess this medical professional doesn’t read the Johns Hopkins Health Alert (JHHA). Recently, they reported that sexual dysfunction is a potential side effect of all classes of antidepressants. The Johns Hopkins folks claim that between 30% and 70% of people who take antidepressant medications experience sexual problems, which can begin as early as the first week. Now that is depressing, isn’t it?

Of course, my view as a clinical sexologist is jaundiced because all I see are people having these problems, but I still believe the number is probably higher. Intimacy skills depend on nuanced and delicate communication between sexual partners. The ability to experience and feel is blunted by psychotropic drugs. Any interest in sex or desire (libido) is invariably muted, or sometimes wiped out, when folks ingest antidepressants.

Physiologically, the side effects are extremely clear. These drugs frequently cause erectile dysfunction in men and difficulty achieving orgasm. In women, antidepressants can cause vaginal dryness and decreased sensation, also making orgasm difficult or impossible. So it’s no surprise that many people (JHHA says up to 90%) stop taking their antidepressant medications prematurely. Fortunately, there are alternatives for restoring sexual pleasure and intimacy that don’t involve ditching medication entirely.

You might try dividing your doses or decreasing your dose very slightly, to see if this eliminates side effects. Of course, you should get your doctor’s advice on any of these suggestions. I’ve found, in my neck of the woods, that psychiatrists are generally better educated about psychotropic drugs than general practitioners.

You could try changing the time of day that you take your pills. For example, if you and your partner usually make love after dinner but before bed, it would be wise to take your medication after sex, but before bed, so the blood levels of the drug will be lowest the next day after dinner (when you usually have sex).

You may be surprised to learn that Viagra can be helpful for BOTH men and women experiencing sexual dysfunction. I must confess that this is not an option that I’ve suggested for any of my patients, but Karen Swartz, MD, at Johns Hopkins, swears by it.

Many people I work with, and their partners, swear by “drug holidays.” Just like a weekend getaway can perk up a tired marriage, not taking your medications for a couple of days can lower the rate of sexual side effects, without increasing the risk of a recurrence of depressive symptoms. These periodic two-day breaks have become something that one couple I work with look forward to, and that anticipation itself can add spice to a relationship languishing in the land of lost libido.