The Body’s Cycle of Learning 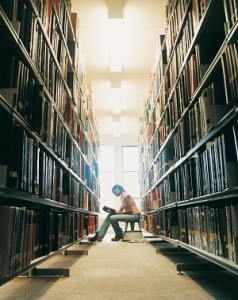 In this article I will look at this physiological response of the body to stimulus that occurs in our environment and how, from an early age, that reaction pattern becomes internalized and creates our life patterns.

When something occurs in the environment, let’s call it the “stimulus,” we have a corresponding reaction that we can call the “charge”. The charge can be any type of reaction to a stimulus, be it excitement, anger or fear. It is a preparation, a building of energy in our body. If the charge is allowed to its natural flow it will then be discharged through the muscles, usually through sound, breath or movement. This allows the physiological system to move into a phase of relaxation. From that relaxed state the body can extract or recoup the important messages from the experience, making this the recuperation phase. It is different from relaxation in that here the system is processing the information from the experience. On an unconscious level the body sorts out how well the particular response worked. This leads to a further phase called integration. When any experience goes through this whole cycle uninterrupted there is a new baseline, we now know how to, or how not to, relate to the particular stimulus we have just experienced. Then we can fully move on to whatever the next moment is presenting.

Let’s say you are walking down the street and suddenly a big dog charges at you. Your reaction is to make yourself look big and yell “NO” as loud as you can. The charge and discharge happened before you even knew it. As the dog backs away and you see you are safe, your body begins to relax. You may find yourself shaking a little. This is a way for the body to continue to discharge any excess energy in your system. Eventually, when you know you are safe again, you should be able to go into the relaxation phase, a deep letting go of all of the muscle and brain activity leading to a state of rest after the surprise and exertion of the attack. From here, your body will take stock of the fact that you were able to let the dog know you were in charge of your space, this is the recuperation phase, to understand the implications of the response. In the integration phase the information will allow you a certain sense of mastery that you can carry with you into any future situations of dog danger. You will be able to call upon the learning from this experience in future situations.

But what happens when the cycle is not completed in such a neat and clean way? Say we see the dog, we tense up with the charge but he runs in and bites us before we can respond. Where does the charge go? Perhaps it is released through a crying spell after the attack, or perhaps we have already learned early in life that we shouldn’t respond. Then we might hold the charge deep within our system while finding another way to avoid the dog attack. We manage to hold the energy with our muscle structure, holding the energy in in order to react in a way that, from some past situation, we believe will keep us safe. Look at the cycle on the circle below. In this scenario we have a stimulus and a charge, but then instead of moving around to discharge and recoup, the energy goes back down to the bottom of the chart, maintaining the system’s status quo from which there can be no new learning. From this chart one can see how our earliest life lessons get replayed over and over until we can manage new reactions to carve out new learning and a new baseline to move us forward in our lives.

There are several ways that we stop the discharge and the cycle of learning which we will discuss in future articles but for now let’s look at some clinical situations to better understand the impact of the cycle and how to open it and create change. Here is a fictitious clinical example:

A client suffered physically at the hands of his sibling growing up and neither of his parents protected him. He tried hard to be good and to not get in trouble. He learned to be quiet and not attract attention to himself in order to keep from getting hurt. He learned to cut off from his feelings to the extent that when strong feelings emerged in others in group therapy, he would become very sleepy. He fell asleep in social situations, and needed naps every day after work. In therapy he began to recognize that being sleepy was a way of coping with feelings that he didn’t know how to deal with and he began to recognize and express them. Eventually he found that he often was irritated by other men. He perceived that they didn’t like him and he was resentful of this. During a group session he was relaying a situation where he felt left out at work. I asked him what he would really want to say or do.

“I’d like to go over there and beat them up”, he has his fists up and got a lot of enjoyment from realizing this. When offered a large pillow on which to open the expression of anger more he turned pale and closed his eyes. He states he is overwhelmed with memories of his brother towering over him. I invited him to make his palms flat and just push against the pillow, holding his big brother off. He does this with his eyes closed and his head down. He asks to stop. He realizes this is what he is always doing. He reflects that he feels the energy (rage) coming up in him and that he is afraid of his feelings, afraid that it would be too much for him and that he might lose control. So he holds it off with his muscles, not even knowing anymore what it is he has to express. He is still living the abuse that he never got to respond to.

This is an example of how an external threat creates a charge in the system to protect itself; but after years of holding and a muscle armor forming to hold the energy in, he has internalized the threat. There was no danger to him in the room at the moment, nor at work. The danger now was in feeling his own feelings. An unresolved external threat becomes an internal threat and we form our lives and our personality around holding it off. But there is no judgment when energy and charge is concerned. The fear of the energy would be the same if it were pleasure or anger flowing, the client has dulled down his excitement level so that he does not know how to surrender and allow it. He cuts himself off from joy as much as from his self-protective rage.

Look at the cycle of learning wheel below. In this situation the client feels the charge build and ignite the natural internal impulse to protect himself. He unconsciously stops himself before the discharge. This creates a straight line back to “status quo.” The experience informs the other levels of being, the thinking, behavior and emotions. Along with the body these levels of being are the very make-up of our embodied existence. In this case he thinks, “guys are stupid” or, “nobody likes me”; and at the will/ behavior level he avoids people; the client becomes isolated in his life based on a physical blockage, the fear of his own life energy. This distorts the charge and results in energy blocks which eventually we tune out and don’t feel anymore; it is resistance to the life flow. 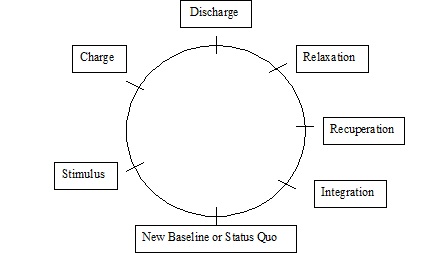 Over time the trapped energy crystallizes in the physical body and becomes muscle memory forming our automatic response, in this case, of withdrawal. In order to heal and change his patterns the unconscious process needs to be made conscious. Then he will remember and experience the original charge, allowing it to complete the cycle. We don’t necessarily need to remember or re-experience the content of the trauma, but of the energy we put against it; the impulse and emotional process we use to overcome the experience. Here is another example of how this can happen in therapy:

A client had experienced ongoing sexual intrusion by someone she cared about. She was constantly hoping to be able to confront the perpetrator about this and felt that her healing depended on it. During a session she went into a regressed state while lying down in my office. Noting that she was pulling her legs up and tensing them, I had her put her feet against a piece of foam and push. Her legs started shaking, this is the charge, the energy, trying to break through the muscle holding. I invite her go with the discharge. She begins to kick until she is kicking very hard and yelling “OUT” and “NO”. When she was finished she felt alive and excited in a way she hadn’t felt in years. She no longer felt the need to continue an ongoing relationship with the person, hoping to get an apology. She didn’t need anything else from the perpetrator once she freed her own energy that had gotten blocked and held back from the situation. She had to remember and loosen the energy that she had put against the intrusion, she had been holding it all of this time.

In this situation the discharge breaks through the muscle armoring; the client is open and breathless, she feels alive and her energy is flowing; she “recoups” the learning from the situation: “I expressed myself and I feel better, nothing bad happened”. Her muscles experience a different level of openness, fluid flows into the cells that were previously tight and contracted. She is in an expanded state on all levels. The system does not have to return to its former level of tension and she didn’t need to confront her abuser to accomplish this. She learns that now as an adult, in some situations, she may be able to stand up for herself. This is a new baseline and she doesn’t need to fall back to status quo.

It may be useful for readers to copy off the graph of the cycle of learning and look at situations in your own life. See if your reactions allow you to get all the way around the circle and to be able to respond to each situation as it presents itself, or whether you are disconnecting from the cycle in a way that puts you back to status quo and prevents your being flexible and present. This can be especially helpful as you meet new people, to be able to form relationships with them and who they really are rather than from your past experiences.