Spirituality and Therapy: Opening the Portal With Prayer 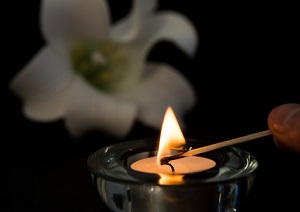 Over the past decade, as I began to practice spiritual psychotherapy as well as more traditional psychotherapy, I have worked with a number of people who have expressed difficulties with prayer. Some don’t know to whom they should pray; others don’t know how; and others report that they have tried it and their prayers were rarely, if ever, answered.

I recently read The Private Patient by British mystery writer P.D. James in which she describes a character seeking help with a difficult decision. “The cross was directly in Marcus Westhall’s sightline, and sometimes for long periods of silence he would fix his gaze on it as if expecting from it some mysterious power, an aid to resolution, a grace which he realized would always be withheld…For him it served as an aid to concentration, the focus of the thoughts which crept and rose and whirled in his mind like brown brittle leaves in a gusting wind…He had entered quietly and, seating himself as usual on the back wooden bench, gazed fixedly at the cross, but not in prayer, since he had no idea how to begin praying or with whom precisely he would be attempting to communicate. He sometimes wondered what it would be like to find that secret door said to be open to the lightest touch, and to feel this burden of guilt and indecision fall from his shoulders. But he knew that one dimension of human experience was as closed to him as was music to the tone deaf.”

The “…secret door said to be open to the lightest touch” is a beautiful summation of my personal assessment of and experience with the power of prayer.

For those who are part of a specific religious tradition and have the tools of their faith with which to communicate with the divine, it is often a matter of taking the time out to pray and learning both how to frame their prayers and how to listen. This is more subtle than it sounds. All too often I find that people think that the only purpose of prayer is to ask for something from God, usually something very concrete, i.e., money, a new job, a partner, relief from pain, and so on.

To those individuals I suggest reframing the request and, instead, asking for help acquiring the tools to get that for oneself. Then I talk about listening. Once again, all too often, people are better at asking than listening. Their wish is that they pray and the wish be granted (kind of like the fairy godmother concept). However, rarely do they take the time to sit quietly after prayer to allow the answer to come. I find people are impatient and forget the cardinal rule (no pun intended) of prayer, which is that God answers in God’s time and not ours.

For those who are on a spiritual path not connected to any particular religion, I encourage them to keep it simple. I borrow from the not-simple-at-all wisdom of the 12 Steps of Alcoholics Anonymous, particularly the 11th Step: “Sought through prayer and meditation to improve our conscious contact with God as we understood God, praying only for knowledge of God’s will for us and the power to carry that out.”

As you take a moment to ponder the meaning of that step, I’ll give you my interpretation. I believe the step is emphasizing the importance of being on a spiritual path each and every moment; to do it consciously and with intention. I also believe that the step is recommending seeking knowledge, rather than specific things. We are encouraged to seek the answer to the basic question of what God wants for us. Everything else is irrelevant, including what we want. (You know the old saying “Be careful what you wish for.”) This is because we often lack the wisdom or perspective to know what is truly right for us. Once we understand what God wants for us, we need to go about achieving it, and that’s where the second part of the step comes in—the power to carry out God’s wishes. This is where the divine and the human intersect. This is where our own efforts to create our lives play a significant role.

When all of our actions and behaviors and choices are divinely guided, it’s then we can move mountains and find the joy and satisfaction we all seek.