Polyamory in a Monogamist World 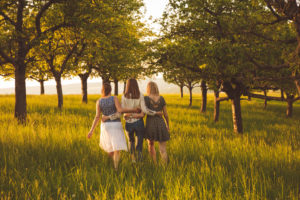 We live in a culture that prioritizes and glamorizes monogamy. This is most clearly visible in the importance that we give to marriage. Not only is it expected to be a lifetime goal, but it carries with it state and federal benefits. However, monogamy is only one way to structure a relationship.

Many people have found they flourish in a relationship structure that stretches beyond traditional monogamy. This can mean many different things for different people. Some terms used to describe alternative relationship structures are polyamory, open relationship, open marriage, non-monogamy, and polygamy. Each of these structures is different, but they all share the concept of being romantically linked with more than one person at the same time.

I teach a human sexuality class at a college in Philadelphia. My students are often diverse in terms of age, ethnicity, sexual orientation, and religion. Every semester, I have a guest speaker come in and talk about polyamory. He defines polyamory for the students as “the desire, practice, or acceptance of having more than one intimate relationship at a time with the knowledge and consent of everyone involved.”

I enjoy the opportunity to learn from him and to see the reactions from students in my class. Some people respond with openness and curiosity; they want to know more about polyamory and what kinds of benefits and drawbacks come with it. Some students are defensive and incredulous; polyamory falls outside their value systems. And almost all of them respond quickly, either expressing their own shame or shaming others. How could you tell your friends and family? Wouldn’t you face a lot of discrimination?

This semester, a student pointedly asked the speaker, “What do your parents think?” What strikes me about this is how quickly the students go from exploring their own wants and needs to anticipating hostility and rejection from friends and family. Instead of questioning what it might feel like to be in this kind of relationship and exploring the feelings of excitement and curiosity that come up in the room, the question being explored is how to live with a stigmatized identity. Practicing polyamory in our culture is a radical act.

Living with an Identity Surrounded by Stigma

This feeling of shame and navigating stigma has frequently been expressed by people I have worked with who are in polyamorous relationships. With a polyamorous relationship come all of the challenges that accompany living with any identity that is not culturally sanctioned. This includes coming out to oneself, family, and community. It also includes experiencing institutional discrimination in the workplace, school, or within a religious community. Lastly, it includes the day-to-day experience of having your identity invalidated by the mainstream media and popular culture. This invalidation can be found in punch lines on television shows that glorify monogamy and demonize polyamory, in reality shows that tokenize and fetishize non-monogamous relationships, and in movies that typically only show monogamous couples. The message is clear: being polyamorous is not a valid relationship structure.

It can be even more frustrating to acknowledge and make visible this type of discrimination because we don’t have a term for it. Unlike homophobia or racism, it’s difficult to name because it doesn’t have a name. However, the experience of this discrimination can lead to feelings of loneliness and shame. This shame isn’t about the individual’s own value system, but about the messages that he or she is getting from society about his or her relationship structure.

In her book, Daring Greatly: How the Courage to Be Vulnerable Transforms the Way We Live, Love, Parent, and Lead, researcher Brené Brown talks about shame, the importance of vulnerability, and combating shame—something she calls “shame resilience.” Her first element of shame resilience is recognizing shame and understanding its triggers. Shame itself can be connected to many different parts of ourselves and take many forms. In the context of utilizing shame resilience to shift the shame of living in an alternative relationship structure, recognizing shame and understanding its triggers can be a way to begin to expose the unrelenting messages about monogamy and polyamory that proliferate in our culture. I’ve worked with people who can’t figure out why they feel so guilty until they begin to recognize the messages they are getting that invalidate their identity.

This is the step that begins to build a language to talk about what is happening, and this language can be an empowering tool. It can take an internal experience and connect it to an external event. Suddenly the issue can go from “I am a bad person” to “Someone is telling me I’m a bad person. Do I really want to believe them? How much does their opinion matter to me? What do I really believe?” This process makes the feeling of shame and oppression something that can be understood not as a personal failing, but as the result of a message from somewhere else that may or may not be consistent with your own belief system.

Polyamory is a valid alternative relationship structure, and as with other alternative identities in our culture, people who practice polyamory may find themselves affected by oppression and discrimination. Recognizing and naming this experience as caused by an external force—instead of perceiving it as an internal failure—can be one tool toward healthier relationships.