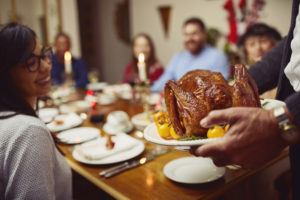 The 2016 presidential election was, by most accounts, one of the most contentious in America’s history. The American Psychological Association (APA) published a survey one month before the election. The 2016 APA survey found 52% of Americans had “somewhat” or “very” significant stress about the upcoming election.

New research in the journal Science suggests political anxiety is affecting family relationships. The study looked at the length of Thanksgiving visits following the 2016 election. People visiting family across the political divide cut their visits short by an average of 30-50 minutes.

Next, researchers looked at voting data in users’ home voting districts. Users were weighted based on the number of Democrats and Republicans in their precincts.

Many users visited precincts with voting records different from those of their home precinct. These people often had shorter visits. In 2015, the average Thanksgiving visit was 4.2 hours. In 2016, people visiting “opposing” districts stayed 30-50 minutes less than this average.

The data is merely suggestive, since researchers did not know the voting histories of individual cell phone users. Yet on average, people are more likely to vote the way their district voted. The large sample size points to a potential trend.

When Thanksgiving visits are shorter, families talk less. This provides fewer opportunities to talk through and across political differences. The study estimates a nationwide loss of 34 million minutes of cross-partisan talk, thanks to the decrease in family Thanksgiving time.

If your relationship with your family has been damaged by political anxiety, therapy can help. A compassionate therapist can help people resolve their differences by offering fair and impartial guidance.