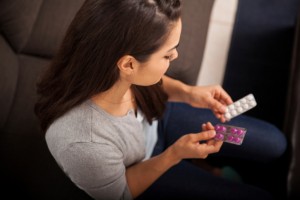 Placebos can be highly effective, and many drug studies compare real drugs to placebos to assess whether participants are responding to the drug itself or simply getting better because they believe they will.

A new study published in JAMA Psychiatry suggests that the way a person with depression reacts to a placebo may predict how well he or she will respond to the real thing. Previous research testing antidepressants against placebos suggests 40% of antidepressant response may be attributable to the placebo effect.

Using Placebos to Predict the Effectiveness of ‘Real’ Drugs

The team has been studying the placebo effect for more than a decade, and their research has demonstrated that the brain’s mu-opioid system—the pain relief center—responds to pain when given a placebo.

For this study, researchers used positron emission tomography (PET) scans to look at the brains of 35 people with major depression. Participants were not taking antidepressants and were told they were going to take a new depression drug. Instead, they received a placebo for the first week. When participants came in for a brain scan, they also received a saline injection but were told the injection might have the power to rapidly relieve depression symptoms. Many participants reported some improvement in their symptoms with the aid of the placebo.

What These Findings Could Mean for People with Depression

These findings suggest the body’s own pain alleviation system might work more effectively in people who respond well to placebos, and some people may have more natural resiliency that could lead to a greater improvement in depression symptoms. The next step, the researchers say, is to figure out how to enhance that natural resiliency.

Worldwide, more than 350 million people struggle with depression, making it the leading cause of disability. It is a major contributor to suicide, which claims the lives of a million people each year, according to the World Health Organization.