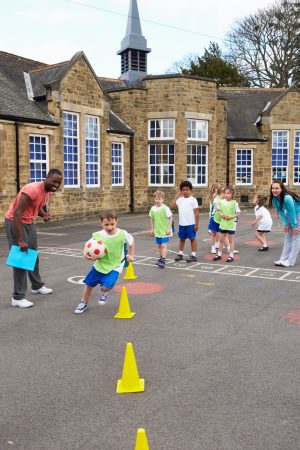 According to a new consensus statement published in the British Journal of Sports Medicine, children perform better academically when they have access to physical activity at school. The article highlights research pointing to the cognitive and emotional benefits of regular exercise, suggesting physical activity is important even when it intrudes upon other academic activities.

How Physical Fitness Can Benefit Children

The 24 signatories to the statement developed their recommendations during an April meeting in Denmark. After reviewing the research on the effects of regular physical activity—which includes both structured activities, such as team sports and physical education programs, and unstructured activities, such as outdoor play—the team drafted the statement highlighting the benefits of physical activity.

Some highlights of the statement include:

The statement also encourages increased access to parks and other recreational facilities as a way to promote physical activity. Another recent study suggested exercising after learning something new boosts memory and recall.

How Much Physical Activity Do Children Need?

The U.S. Centers for Disease Control and Prevention (CDC) recommends at least 60 minutes of physical activity each day for children ages 6-17. Most of this activity should be in the form of aerobic exercise such as walking or running. Children should also perform muscle-strengthening activities, such as push-ups or gymnastics, and bone-strengthening activities, such as jumping rope, at least three days per week. The CDC places no upper limit on the amount of physical activity children need.