People with Dementia May Experience Delayed Symptoms of PTSD 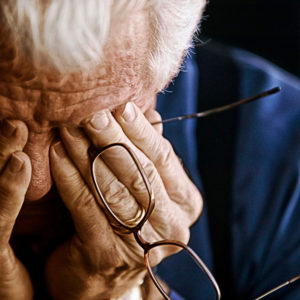 Some people with dementia may experience symptoms of posttraumatic stress (PTSD) long after the initial trauma, according to research published in the journal Progress in Neurology and Psychiatry.

From an initial sample of 747 participants, the study ultimately identified three people with dementia who experienced delayed-onset PTSD. The study participants displayed symptoms of trauma many years after it happened.

In people with dementia, the study cautions that providers may mistake symptoms of PTSD for behavioral and psychological problems related to cognitive decline.

Dementia May Mask Signs of PTSD

Dementia causes a wide range of cognitive changes. These changes can lead to behavioral issues and emotional turmoil. In people with dementia, the review argues, symptoms of PTSD may be misdiagnosed as symptoms of dementia.

The study looked at case histories of three older adults with dementia. Its small scope means more research is necessary to determine the prevalence of delayed-onset PTSD in people with dementia.

Other research has found a link between age-related cognitive decline and worsening symptoms of PTSD. A 2001 study assessed three seniors with PTSD that had previously been under control. With the onset of cognitive impairments due to dementia, participants’ symptoms of PTSD worsened.

Identifying and Treating PTSD in People with Dementia

People with dementia sometimes appear to be living in the past. They may believe they are living in a different time, or they may think loved ones are people from the past. For people with a traumatic past, this reliving of the past can be particularly difficult.

Because of the cognitive declines associated with dementia, however, it is difficult to provide therapy to people in the advanced stages of Alzheimer’s or other types of dementia. The study’s authors suggest physicians should work to identify people at risk of late-onset PTSD in the early stages of dementia. This allows them to work through a traumatic history before any serious cognitive decline, potentially reducing the severity of symptoms as dementia worsens.

According to the National Center for PTSD, 60% of men and 50% of women experience at least one traumatic event during their lives. Therefore, many people diagnosed with dementia may be vulnerable to PTSD.