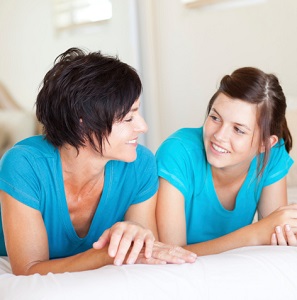 Family of origin issues are a common focus of psychological research and therapeutic work; if a person is having difficulty coping with life as an adult, it is natural to examine the past experiences of that individual to assess whether his or her upbringing or childhood had a hand in causing present-day problems.

When a relationship isn’t going smoothly or is nearing its end, for example, a person might start to evaluate past relationships to identify patterns that he or she may be repeating. According to research published in this month’s Journal of Marriage and Family, there is one relationship that has an especially significant impact in determining the quality and depth of intimacy in later relationships: the one that occurs (or fails to occur) between parents and teenagers.

Prior research has revealed the impact of factors such as physical or verbal abusiveness and parental discord or divorce on the romantic relationships of children as they enter adulthood. This more recent study looked specifically at how the quality of the parent-teenager relationship affects the quality of relationships later in life as well as issues surrounding self-esteem and depression that often set in during the late adolescent years.

Data was compiled using information gathered as part of the Add Health Study, which asked teenagers to answer personal questions via in-home interview, self-interview, and computer-assisted interview, beginning in 1994 and most recently acquiring data in 2008. Over 20,000 students from 80 high schools and 52 middle schools in the United States were included in the first “wave” of the study. By the final wave, there were over 15,000 of the original participants remaining, with their ages ranging from 25 to 32.

In the early waves of the Add Health Study, the teens answered questions like “How close do you feel to your mother /father?” and provided a rating on a scale of 1 to 5 in response to statements such as “You are satisfied with the way your mother/father communicates with you” and “Most of the time, your mother/father is warm and loving toward you.” Questions were also posed regarding personal happiness and self-esteem.

For the final wave, the majority of respondents were married, while others were either living with or dating someone consistently. Questionnaires asked them to evaluate their “agreement” (on a scale of 1 to 5) with statements such as “My partner listens to me when I need someone to talk to,” “My partner expresses love and affection for me,” and “I am satisfied with the way we handle our problems and disagreements.”

By examining their responses, the researchers found that adolescents who have a strong bonding experience with their mothers and/or fathers are likely to experience satisfying amounts of intimacy in their adult relationships. They also face less depression and tend to feel relatively grounded and secure with regard to self-esteem.

Those who do not develop healthy dialogue and understanding with their parents, however, may experience “slightly reduced success” in maintaining solid intimate relationships for up to 15 years following adolescence. They also are prone to experiencing depressive symptoms and having a low sense of self-worth.

The findings demonstrate that the relationship between parents and teenagers does factor into the quality of later romantic partnerships; and yet, the fact that only a slight reduction in success was noted implies that an adolescent who has a tumultuous relationship with one or both of his or her parents will not necessarily experience poor-quality relationships in the years following. It just may take an extra bit of time and effort for a teenager who endures instability at home to cultivate stability in independent relationships as an adult.

Though it may be tempting to point fingers at parents for intimacy issues, the researchers point to the study’s limitations to suggest that further data, potentially using “psychometrically validated scales,” is needed to establish a firm link between parent-adolescent relations and intimate relations later in life.