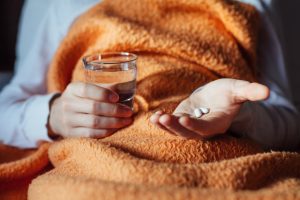 People taking acetaminophen—the painkiller ingredient in popular brands such as Tylenol—may be less empathetic to others’ pain, according to a study published in Social Cognitive and Affective Neuroscience. Researchers also found acetaminophen reduced the degree to which study participants were bothered by a loud blast of white noise. The study only looked at short-term effects of acetaminophen use, not long-term consequences.

According to the study, 23% of Americans take a drug containing acetaminophen each week.

What Is Acetaminophen’s Effect on Empathy?

The study involved two separate experiments. In the first, 40 college students drank 1,000 mg of acetaminophen—the equivalent of a dose of Tylenol Extra Strength. Another 40 students drank a placebo drink. None of the students knew which group they were in.

Researchers waited an hour for the medicine to take effect, then asked the students to review eight scenarios involving a person in physical or emotional pain. Participants then rated the intensity of the pain associated with each scenario on a scale of 1-5. Students who took acetaminophen rated the scenarios as less painful than students who did not take the drug.

For the second trial, researchers divided 114 college students into two groups, with one group taking 1,000 mg of acetaminophen and the other receiving a placebo. After the drug took effect, researchers subjected each student to four 2-second blasts of white noise ranging from 75-105 decibels. At 75 decibels, noise is comparable to that of a vacuum cleaner, while a level of 105 decibels is significantly louder—akin to a table saw or sporting event.

Researchers also had the students socialize with one another, then asked them to watch a simulated game. During the game, two participants the students had previously met excluded a third. Students who took acetaminophen thought the excluded student would have less severe hurt feelings.

Do All Painkillers Decrease Empathy?

A 2004 brain scan study found the same areas of the brain were involved both in experiencing pain and watching another person experiencing pain. This suggests a drug that reduces pain sensitivity could also reduce empathy, regardless of the specific ingredients it contains. The researchers plan to study ibuprofen—another popular painkiller—to see if it has the same effects on empathy.