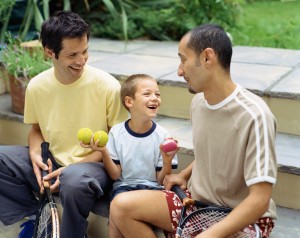 Friday’s landmark Supreme Court ruling in Obergefell v. Hodges immediately legalized same-sex marriage across the country, forcing even the most conservative states to accept marriage equality. Opponents of gay marriage have long argued that heterosexual marriage is the only healthy way to raise children, but a new study published in Social Science Research says there is no evidence that same-sex parenting harms children in any way.

Though the overwhelming majority of studies suggest that children of same-sex parents fare just as well as—or better than—children of heterosexual parents, opponents of gay marriage often argue that the research is biased.

Jimi Adams, an associate professor of health and behavioral studies at the University of Colorado-Denver, analyzed thousands of studies on same-sex parents. His team found no adverse effects associated with same-sex parenting. They argue instead that, by 1990, most researchers agreed that same-sex parenting was not harmful to children. By 2000, the consensus was overwhelming.

Children of same-sex parents may, however, face at least one challenge. Discrimination, bullying, and stigma all continue to be problems for members of the LGBT community and their children. One study found that the stigma of LGBT parenting could slightly reduce well-being, but another study found that children of LGBT parents are more resilient. This might explain why they score so highly on well-being measures, even in the face of discrimination and bullying.

Between 1 and 9 million children have at least one gay parent, and 27% of same-sex households have a child.