Office Affairs: When a Workplace Friendship Crosses the Line 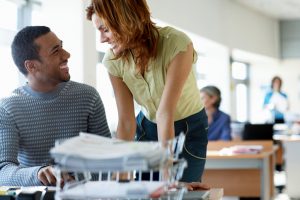 While affairs can begin in a variety of ways, work is one of the most frequently reported settings where infidelity begins. Many people who begin affairs at the office later say, “I didn’t set out to cheat on my partner; it just happened.” Although it may seem as though it “just happened,” there are steps that led up to the infidelity.

Research points to opportunity as a substantial factor in affairs that begin at work. These relationships typically begin with healthy boundaries. When a friendship crosses a line of emotional intimacy, the chances of moving into sexual intimacy increase (Glass & Staeheli, 2004).

If you think you may have crossed a line with someone at work, ask yourself the following:

If the answer is “yes” to any of these, put a stronger boundary between you and the coworker immediately (Glass & Staeheli, 2004). In the event of an affair, whether begun at work or elsewhere, what next? Partners not involved in the affair often feel hurt and need their hurt acknowledged. The affair might be the most apparent issue, but along with it are issues that left the relationship vulnerable to making poor choices.

The affair might be the most apparent issue, but along with it are issues that left the relationship vulnerable to making poor choices.

The partner who responded to legitimate concerns with an affair is responsible for owning the fact the focus is going to be on the affair for a period of time before the legitimate issues can be addressed. This takes courage because it is not easy to listen to the betrayed partner explain how the affair hurt them. Likewise, some people who have had an affair may be unwilling to be an open book to their partner for however long it takes to rebuild trust. Yet, these are important steps toward healing.

While some couples dig in and work through an affair and the issues preceding it, others find it easier to leave. In some cases, they leave for the person they had an affair with. But only a small percentage of relationships that begin as an affair last. Unresolved contributions to a failed relationship leave a person prone to make the same mistakes in future relationships.

What to Look for in a Couples Therapist

If you or your partner have engaged in an affair and are considering counseling, or have tried counseling before and felt it went nowhere, look for the following in a therapist as suggested by Glass and Staeheli (2004):

It is harder to take our own inventory than it is to take someone else’s. It is harder still to work on our own issues with honesty and self-compassion. But if each partner focuses on themselves, the chances are greater the couple will rebuild trust and intimacy. If you believe your partnership is vulnerable to infidelity or has already experienced it, contact a licensed couples counselor.